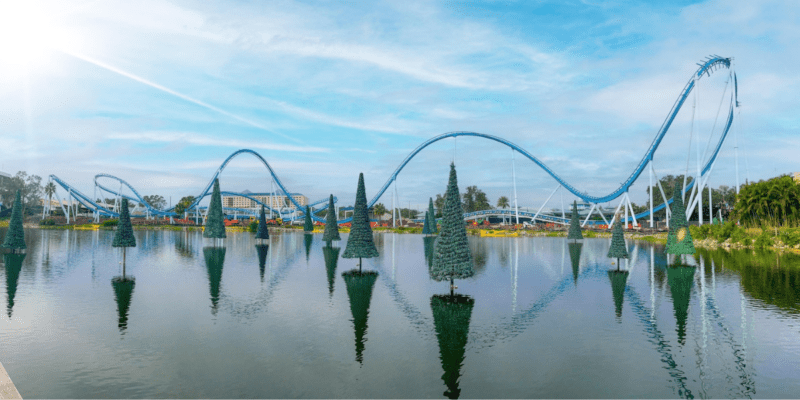 Florida is home to some of the most popular theme parks in America, from Disney World and Universal Orlando Resort to SeaWorld and Busch Gardens, each with its own iconic attractions, fun and thrilling experiences, exciting entertainment offerings, and much more. However, one Orlando theme park is taking massive steps ahead of its competition as the track for an all-new coaster is now complete.

Little over six months ago, SeaWorld Orlando casually announced the arrival of a “mystery attraction,” sharing a picture of the first track pieces making their way into the Park. The theme park has since made significant progress in constructing an all-new coaster, scheduled to open in Spring 2023.

SeaWorld Orlando recently shared an image showing that the track for the Park’s latest attraction, Pipeline: The Surf Coaster, was complete.

Pipeline: The Surf Coaster will be SeaWorld Orlando’s seventh coaster and one of the three groundbreaking projects developed by SeaWorld Parks & Entertainment for 2023. SeaWorld San Diego will open Arctic Rescue, the fastest and longest straddle coaster on the West Coast. SeaWorld San Antonio will launch Catapult Falls, the world’s first launched flume coaster and the only vertical lift in North America.

Despite the significant progress made at SeaWorld Orlando, theme park officials have not revealed an official opening date for the all-new attraction. Inside the Magic will keep you updated as more information becomes available.

Feel the awesome power of the ocean in a whole new way on Pipeline, the first-of-its-kind surf coaster. As soon as you’re in position, you’ll know something’s different. Experience the rush of launching 110 feet up and sensing every bank and curve as though you’re really riding the waves, thanks to an inventive harness that keeps you secure while giving you unparalleled freedom of movement. The seventh addition to the Coaster Capital of Orlando leaves nothing but amazement in its wake. Are you ready to get on board?

Are you excited about Pipeline: The Surf Coaster opening at SeaWorld Orlando? Let us know in the comments below!