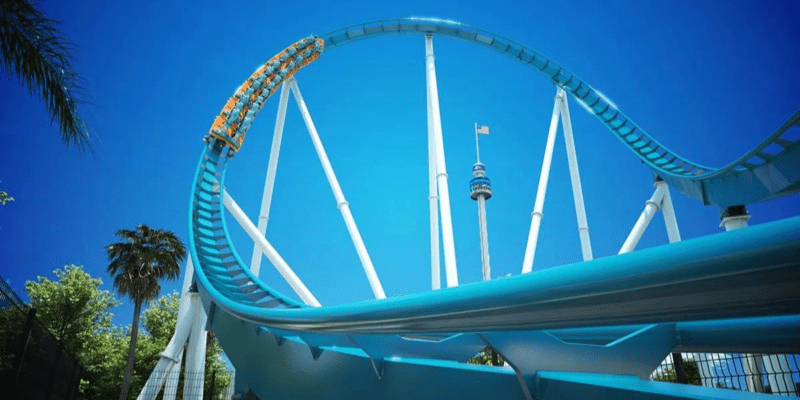 A first-of-its-kind roller coaster is opening at a popular Orlando theme park, with high speeds, high thrills, and a “high surf” advisory.

After months of anticipation and a delay due to Hurricane Ian tragically striking Florida, SeaWorld Orlando has finally unveiled more details regarding its newest roller coaster, showing fans why the theme park is the “Coaster Capital of Orlando.”

What started as a “landscaping project” at the Orlando theme park has slowly but steadily become a highly anticipated project for SeaWorld fans, even when the Park withheld most of the details regarding this new project until recently. During a press release today, SeaWorld finally revealed that the previously unnamed attraction would open at the Orlando theme park in Spring 2023 and that its official name would be “Pipeline: The Surf Coaster.”

Pipeline will be the first-of-its-kind surf coaster where Guests will feel like they are surfing the highest waves as they will be standing up through all the twists and turns of the innovative coaster. Pipeline will take Guests on a thrilling ride 110 feet up in the air, reaching speeds of up to 60 miles per hour through over 2,900 feet of track.

Feel the awesome power of the ocean in a whole new way on Pipeline, the first-of-its-kind surf coaster. As soon as you’re in position, you’ll know something’s different. Experience the rush of launching 110 feet up and sensing every bank and curve as though you’re really riding the waves, thanks to an inventive harness that keeps you secure while giving you unparalleled freedom of movement. The seventh addition to the Coaster Capital of Orlando leaves nothing but amazement in its wake. Are you ready to get on board?

You can see a render of this thrilling new coaster below, or click here to watch it.

Pipeline will be SeaWorld Orlando’s seventh coaster and one of the three groundbreaking projects developed by SeaWorld Parks & Entertainment for 2023. SeaWorld San Diego will open Arctic Rescue, the fastest and longest straddle coaster on the West Coast. SeaWorld San Antonio will launch Catapult Falls, the world’s first launched flume coaster and the only vertical lift in North America.

While there is no official opening date for Pipeline yet, we are “stoked” to experience this thrilling ride at SeaWorld Orlando once it opens in 2023.

Are you excited about the opening of Pipeline at SeaWorld Orlando? Let us know in the comments below!