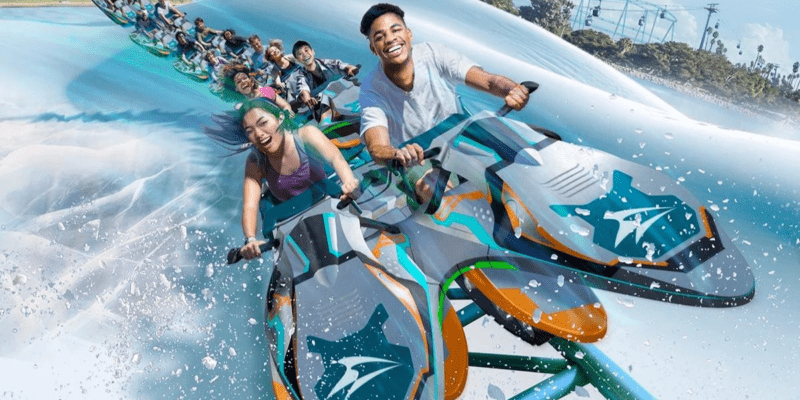 According to the latest details released by the California theme park, an all-new family coaster is coming very soon.

Artic Rescue is the official name for the brand-new attraction scheduled to open in 2023 at SeaWorld San Diego. This new attraction will be a straddle-style ride inspired by SeaWorld Rescue that will take Guests on a high-speed adventure riding a snowmobile through a 2,800-foot-long track. The new coaster will have three launches and will reach speeds of up to 40 miles per hour.

While no official announcement had been made regarding SeaWorld’s latest attraction, the construction of a new coaster was no secret, as many have already spotted the tracks arriving at the Park and the progress made in the construction over the last few months. However, the specifics for the upcoming coaster were kept from the general public until yesterday, September 27, during a press release.

The San Diego Union-Tribune reported that the theme park calls Artic Rescue the longest and fastest straddle coaster on the West Coast, though there are not many of them in California. Some examples include Pony Express at Knott’s Berry Farm and RailBlazer at California’s Great America in Santa Clara. SeaWorld San Antonio, in Texas, is also home to another example, Wave Breaker, where riders straddle a jet ski-style vehicle.

As stated by SeaWorld, Arctic Rescue was inspired by the longstanding animal rescue work the Park is engaged in. The storyline of the coaster itself is that riders are racing through the unpredictable Arctic climate to save the animals that inhabit that area. SeaWorld wants visitors to understand that with the continued climate change, the Arctic sea ice that many animals rely on for survival is melting, threatening the survival of many species.

As people exit the ride area, they will go directly into the Wild Arctic exhibit, which is home to belugas, walruses, and a ring seal, which are among the species most impacted by Arctic sea loss.

Artic Rescue is described by SeaWorld San Diego as follows:

The Fastest and Longest Straddle Coaster on the West Coast

It’s time to hop on your snowmobile and ride to the rescue! The ice is melting, the poachers are lurking, and the Arctic animals are in peril. Join the team and feel the rush of the fastest and longest straddle coaster on the West Coast: Arctic Rescue. It’s only at SeaWorld San Diego, your go-to spot for family-friendly rides.

Artic Rescue will be the sixth coaster in the California theme park and the fourth major project in the last five years. SeaWorld has been on a coaster-building binge since 2018, with the opening of Electric Eel, followed by Tidal Twister in 2019 and Emperor in 2022.

Are you excited about Artic Rescue opening soon at SeaWorld San Diego? Let us know in the comments below!