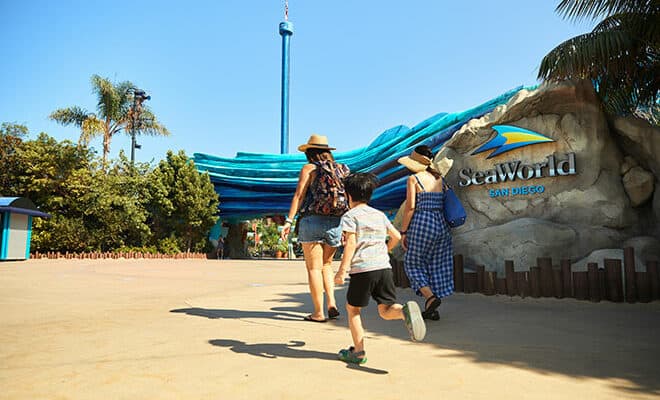 This California theme park is taking a massive step forward with the delivery of multiple track segments and support pillars for a new “mystery coaster.”

In the constant arms race for the fastest, tallest, and steepest rides, SeaWorld has made significant developments to earn one of the top spots among the different theme parks across the country.

These track segments and support pillars will be used in a new snowmobile-themed family launch coaster built by Intamin Amusement Rides, which is expected to begin construction soon. The new attraction will reportedly give Guests the chance to live a thrilling adventure through the arctic tundra without ever leaving sunny Southern California.

This new arctic-themed attraction will be located in a recently cleared area next to the former Wild Arctic flight simulator attraction, an attraction that closed in early 2020 just before the COVID-19 pandemic shuttered theme parks in California and across the United States. These closures caused delays to several SeaWorld attraction projects, including this new coaster, originally scheduled to open in 2021.

The arctic-themed coaster would be SeaWorld San Diego’s fourth major project in the last five years, as the Park has been on a coaster-building binge since 2018 with the opening of Electric Eel, followed by Tidal Twister in 2019 and Emperor in 2022.

Currently, SeaWorld has not released any official information regarding plans for this upcoming coaster, so the attraction’s official name and opening date are not yet available. Inside The Magic will continue to report on this ambitious new project as more information is released.

Not all Guests are aware that SeaWorld locations worldwide have rescued over 40,000 animals as of May 2022, with 21,000 of those incidents involving the SeaWorld San Diego team. Officials state the most common rescues in California tend to be sea lions, seals, sea and shorebirds, and sea turtles.

The California theme park makes significant efforts to support wildlife through several rescue and rehabilitation programs and even deals with a famous repeat offender, Freeway, the sea lion. This playful sea lion has been rescued by Team Members at least three times since last year and “has been showing up in kind of odd situations and spots,” as Eric Otjen, part of the SeaWorld rescue team, commented.

Are you excited about this new coaster coming soon to SeaWorld San Diego? Let us know in the comments below!