Disney Lifeguards Forced to Work, Run Laps to Stay Warm In Freezing Temperatures - Inside the Magic 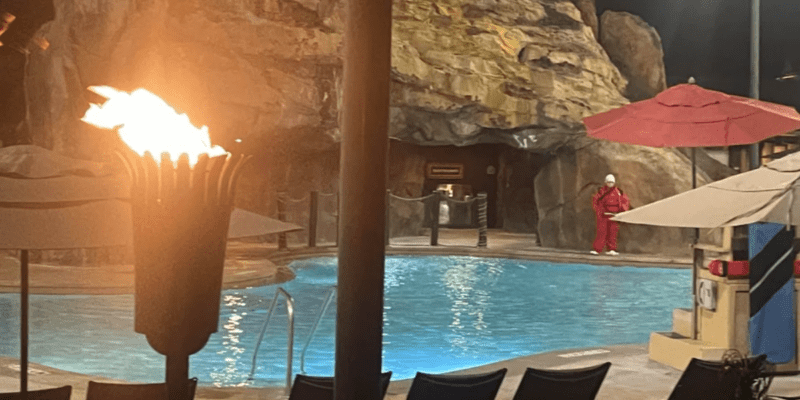 When once-in-a-lifetime winter storms hit the United States last week, even Central Florida was affected by the so-called “arctic blast.”

As temperatures creep into the 40s and 50s, Walt Disney World Resort reopened some Resort hotel pools. Though they’re heated, one current Disney’s Polynesian Village Resort hotel Guest reports that no one is using the pools.

Reddit user u/hawkxor shared a photo of the pool on a chilly night, noting that five Disney Resort lifeguards were on staff and some were jogging around to stay warm:

A cold night at the Polynesian pool. 5 lifeguards were bundled up or jogging around to keep warm… nobody was swimming.

A cold night at the Polynesian pool. 5 lifeguards were bundled up or jogging around to keep warm… nobody was swimming. from DisneyWorld

One very bundled-up lifeguard is visible in the photo, standing in the corner in front of an empty pool at the Magic Kingdom-area Deluxe Resort hotel.

“Reminds of rainy days at the amusement park I worked for,” u/FortySixand2ool commented. “No one would show up, so you basically got paid for sitting around in case someone showed up.”

u/Big_8902 agreed: “I’m sure they didn’t need to be out there BUT there’s always one person that would’ve b*tched about the pool being closed if they weren’t – I’m pretty sure that person didn’t even would want to swim…”

One Guest staying at Disney’s Pop Century Resort, a Value Resort hotel, shared their experience at the Florida Disney Park during the freezing weather. “Pool was closed at Pop Century for 12/24-12/25 and there was still a life guard out all day, both days to tell people it was closed,” u/chucknorrisinator wrote.

Would you swim at Walt Disney World Resort in this weather?