Lightning Lane Who? Disney World Overflowing as Guests Wait a Total 23 HOURS For Attractions at One Park - Inside the Magic 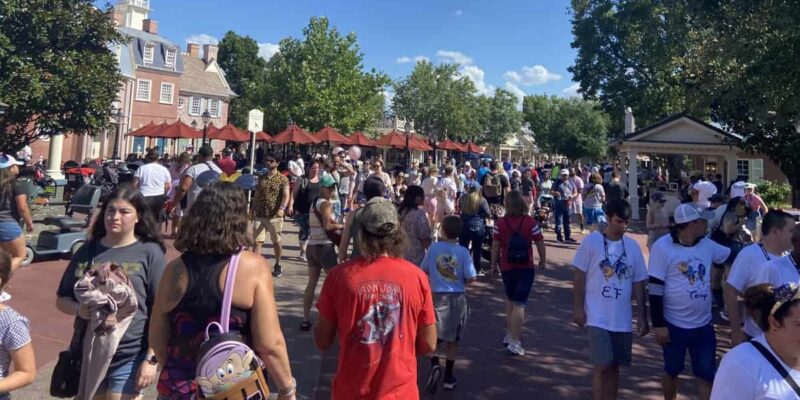 The Walt Disney World Resort in Orlando, Central Florida is currently experiencing its busiest week of the entire year, and Guests are powering through with their Disney vacation despite wait times stretching into triple digits.

The week directly after Christmas and before New Year is notorious for being busy. The Disney Resort is often packed year-round but the festive season truly brings the crowds. At the time of publishing, the entire Resort is fully booked, meaning there are zero Park Passes available for any of the four theme parks: Magic Kingdom, EPCOT, Disney’s Hollywood Studios, and Disney’s Animal Kingdom.

And with a sold-out set of Disney theme parks comes, as expected, major wait times. Like Disneyland Resort on the west coast, Disney World has a number of popular E-ticket attractions like Star Wars: Rise of the Resistance at Galaxy’s Edge, Space Mountain, and Peter Pan’s Flight, and while Guests wanting to experience these rides frequently face long queue times, today is on another level.

At the time of publishing the longest wait is held by Avatar Flight of Passage in Pandora at Disney’s Animal Kingdom. The Avatar-themed attraction has been popular since its debut at Disney Parks but was usurped by the innovative Star Wars: Rise of the Resistance when that arrived at the Black Spire Outpost in 2019. Avatar Flight of Passage has a 220-minute — almost four hours — wait while Rise of the Resistance is sitting at 155 minutes.

Over at Magic Kingdom, Peter Pan’s Flight is at 120 minutes with Seven Dwarfs Mine Train currently at 105. EPCOT’s Remy’s Ratatouille Adventure is hot on Flight of Passage’s banshee tail with a staggering 210 minutes. When adding all the current wait times up at Magic Kingdom Park alone, the total wait time adds up to an astonishing 23 hours.

Related: Are Wait Times Deliberately Inflated in the Parks? Here’s What Disney Says

But despite all this, the long wait times, and the crowded theme parks, Disney Genie is still available to purchase today. However, at a cost of $29 per Guest per day, the high price of Disney World’s “FastPass” replacement could deter Guests from hitting purchase — let’s not forget that earlier this year Disney Genie+ at Walt Disney World would only set a Guest back $15; an increase of almost 100% is enough to turn anyone away, especially during the holidays.

When looking at Park Pass reservations, between today and January 7, 2023, there is no availability for Magic Kingdom and the other offerings have sporadic availability throughout the next week. It looks set to be just as busy as Guests head to Walt Disney World to ring in the New Year.

How long have you ever waited for a Disney World attraction? Let us know in the comments down below!