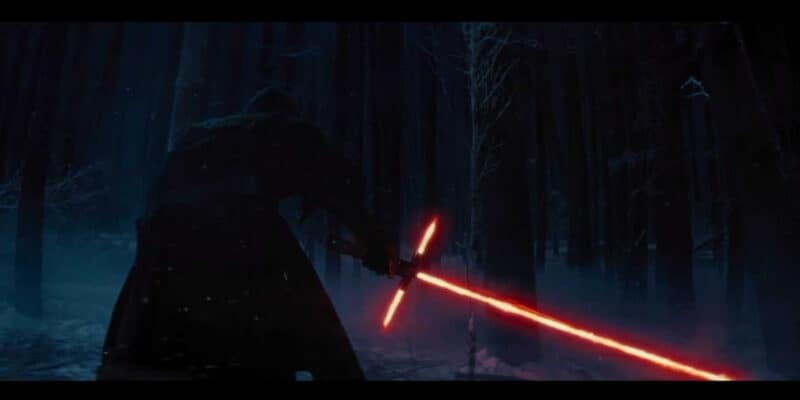 The controversial Cross-guard saber is in Star Wars once again!

Each generation of Star Wars films has had to do something to shake things up in the universe. Star Wars: Episode IV – A New Hope (1977) shook things up simply by existing, and Star Wars: Episode V – The Empire Strikes Back (1980) shocked the world with one of the most famous lines in all of cinema, “No, I am your father”. Shocking moments like that are a hallmark of good cinema, and keep audiences coming back.

That’s why, with the release of Star Wars: Episode I – The Phantom Menace (1999) audiences minds were blown when the menacing Darth Maul (Ray Park) unleashed a lightsaber with not one, but two blades! This was revolutionary to the franchise, and changed things up forever. The epic fight between Obi-Wan Kenobi (Ewan McGregor), Qui-Gon Jinn (Liam Neeson) and Darth Maul (Park), underscored by John Williams standout composition, “Duel of the Fates” was a benchmark moment in Star Wars. Clones of the iconic lightsaber began popping up all over the universe and with good reason!

Following the purchase of Lucasfilm by Disney, the studio announced a sequel trilogy to take place after the events of Star Wars: Episode VI – Return of the Jedi (1983). The studio needed to pull another Darth Maul (Park), and deliver something that would shake up the universe again, and give audiences something to marvel at. The answer to that conundrum came in the form of Kylo Ren (Adam Driver) and his lightsaber. The teaser trailer for Star Wars: Episode VII – The Force Awakens (2015) showed a then mysterious hooded figure dressed all in black who unleashed an unstable looking lightsaber with a cross-guard.

Regardless of audiences feelings about the subsequent sequel trilogy, the response to Kylo Ren’s (Driver) saber was generally positive. Just this week, the cross-guard saber made it’s official comeback to Star Wars with the release of the trailer for Star Wars Jedi: Survivor, the sequel to the highly successful Electronic Arts and Lucasfilm game  Star Wars Jedi: Fallen Order. In the trailer, an older, more ragged looking Cal Kestis (Cameron Monaghan) shows off the new addition to his saber, along some exciting new gadgets and abilities.

Cameron Monaghan, who provides both his voice, and likeness to the character also shared some interesting insights about the Fallen Order sequel, which teased the return of some Clone Wars era villains, including Battle Droids, and MagnaGuards. Calling the story both “beautiful” and “emotional”, Monaghan teased some even more dramatic elements to this installment, than in the last:

“This is going to be an emotional rollercoaster for people…I think that you’d have to be made of stone for it to not hit you in the heart.”

What exactly will hit fans “in the heart” is yet to be disclosed, but things are looking very serious for the heroes of the franchise. Cal (Monaghan) seems to be on his own, Greez (Daniel Roebuck) is nowhere to be seen, the ship The Mantis has seen better days, and many different factions seem to have the lone Jedi on their hit-list. It will be interesting to see who makes it out of this sequel alive!

Star Wars Jedi: Survivor releases on March 17, 2023 on Xbox Series X/S, PlayStation 5, and PC, and stars Cameron Monaghan as Cal Kestis, Debra Wilson as Cere Junde, Daniel Roebuck as Greez, and Tina Ivlev as Nightsister Merrin. The sequel picks up fiver years after the events of the first game, and puts gamers into the shoes of one of the “Empire’s most wanted”, a fugitive member of the Jedi Order in an era in which the Empire is only gaining more and more power.

What do you think about Jedi: Survivor so far? Let us know in the comments below!