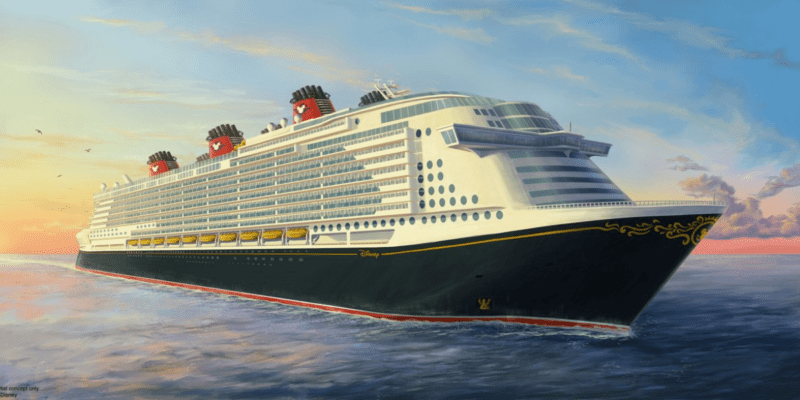 It’s been a big year for Disney Cruise Line. Despite lowered spending on Disney Parks and a recent hiring freeze, The Walt Disney Company continues to invest in sailing the seas.

Earlier this summer, Disney Wish headed out on its inaugural sailings. Just months later, at D23 Expo, Disney Cruise Line announced the introduction of an all-new ship to its fleet, Disney Treasure.

Guests currently can visit one Disney-owned private island, Castaway Cay. But they will soon have another. The Walt Disney Company is making significant progress on Lighthouse Point, a $400 million private island.

Today, Disney Cruise Line confirmed swirling rumors that they would purchase the unfinished German ship, Royal Dream. In a Disney Parks Blog post, Disney announced that the purchase was complete.

Royal Dream will be renamed and reimagined by Walt Disney Imagineers. Unlike Disney Fantasy, Disney Dream, Disney Wish, Disney Wonder, and Disney Magic, the ship will begin its career outside the United States. From Disney Parks Blog:

The new ship, to be based outside the United States, will feature innovative Disney experiences along with the dazzling entertainment, world-class dining and legendary guest service that set Disney Cruise Line apart. The exterior will be adorned in the iconic, Mickey Mouse-inspired colors of the fleet, complete with signature red funnels.

The 208,000-gross-ton ship is expected to be among the first in the cruise industry to be fueled by green methanol, one of the lowest emission fuels available. Disney Cruise Line expects the passenger capacity to be approximately 6,000 with around 2,300 crew members.

Construction will be completed at the former MV Werften shipyard in Wismar, Germany, under the management of Meyer Werft, the Papenburg-based company that built the Disney Dream, Disney Fantasy and Disney Wish.

More information about the ship’s maiden voyage and exact amenities will be announced later. According to Nexstar reporter Scott Gustin, this acquisition doesn’t impact the development of an unnamed Triton Class ship, expected to sail in 2025:

Here's the Disney Cruise timeline as we know it:

Inside the Magic will continue to report updates on new additions to the Disney Cruise Line fleet.

Are you excited about a new international ship coming to Disney Cruise Line?