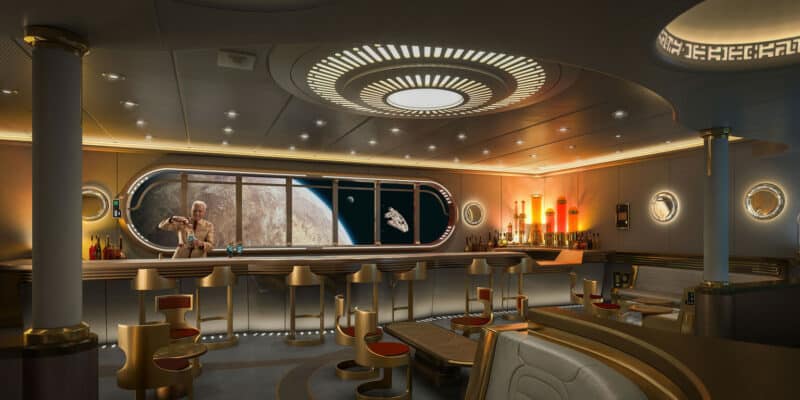 If you’re traveling on Disney’s newest cruise ship, be sure to pack your wallets.

Related: Disney’s Highly-Anticipated New Ride Is Up and Running Again

The time has finally come! The Disney Wish arrived at Port Canaveral earlier this month and today we finally got a hands-on look at all the amenities, features, and experiences of the new ship. The Wish features Broadway-style shows, a watercoaster, kids clubs, an adults-only Star Wars bar, and dining options inspired by Frozen (2013), Princess and the Frog (2009), and more.

Fans have also noticed a very expensive new drink which can be found in the Star Wars Hyperspace Lounge. Disney is no stranger to expensive items, with a Disney World hotel also featuring an incredibly expensive cocktail. But so far, this is looking like the most expensive Star Wars-themed food item in all of the Disney Parks and fleet of cruise ships combined.

This drink comes in its own case which can be seen in the video shared by digital journalist Ashley Carter (@AshleyLCarter1) on Twitter:

The most expensive drink in the galaxy. The Star Wars Hyperspace Lounge on the Disney Wish has a $5,000 Kaiburr Crystal drink.

The most expensive drink in the galaxy. The Star Wars Hyperspace Lounge on the Disney Wish has a $5,000 Kaiburr Crystal drink. pic.twitter.com/ZcUp3yt0RI

That’s right, Guests willing to pay the hefty sum of $5,000 can get their very own Kaiburr Crystal drink, which is described as “The galaxy’s rarest and valuable cocktail”.

Only time will tell how popular this drink proves to be among passengers. Disney Wish joins the legendary fleet of Disney Cruise Line ships: Disney Fantasy, Disney Wonder, Disney Magic, and Disney Dream. From Disney:

Joining the Magic, Dream, Fantasy, and Wonder, the Disney Wish at port Canaveral and Everglades is another incredibly innovative addition to the Disney Cruise Line. The Disney Wish is filled to the brim with magic, including a first-of-its-kind AquaMouse, a Disney attraction at sea, similar to the AquaDuck. The ship also features some fantastic dining opportunities for the whole family, with restaurants themed to your favorite character, scenes,s and music from Frozen and Marvel, and even a Star Wars lounge area!

Will you be traveling on the Disney Wish?