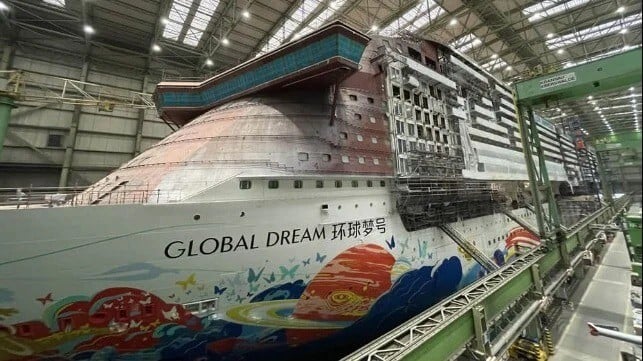 In January 2022, cruise operator Genting Hong Kong went bankrupt due to COVID, leaving cruise ships and other assets up for liquidation. One of these ships, Global Dream, is still under construction and has sat in the shipyard MV Werften, located in Wismar, Germany, since January.

If construction continues on Global Dream, it would be under the direction of Meyer Werft in Papenburg, Germany, who has also overseen the construction of three other Disney Cruise Line ships: Disney Dream, Disney Fantasy, and Disney Wish. These ships began sailing in 2011, 2012, and 2022, respectively. Meyer Werft is also overseeing the building of Disney’s recently-revealed ship, Disney Treasure, which is set to launch in 2024.

The Global Dream isn’t your average cruise ship, though. In fact, this is the world’s largest cruise ship by passenger volume in history, able to hold 9,000 passengers and more than 2,000 crew members. It is 1,122 feet long and weighs 208,000 gross tons.

Though this ship was originally intended to set sail in Asia and was built that way, it seemed odd that Disney would be interested in purchasing this ship. But according to NDR, Disney Cruise Line could be willing to purchase the ship and complete construction.

However, this would not be a cheap bid. The initial cost of construction of this massive project would be 1.6 billion euros (which is almost 1.6 billion U.S. dollars as well). And this estimate is only part of the cost of the entire ship.

Only 75 percent of construction on this project is complete, but if bought, this would be good news for the 950 shipyard employees who would have job security. As exciting as this news is, these are only speculations, as insolvency administrator Christoph Morgen and local Minister of Economics Reinhard Meyer have not provided comments, except that there were confidential negotiations.

Although this news has not been confirmed yet, it’s exciting to think about all the possibilities of this new cruise ship, like themes, dining options, and innovative experiences. We will be looking out for further news on the possible new Disney Cruise line edition.

Do you think the rumors are true? Let us know your thoughts in the comments!