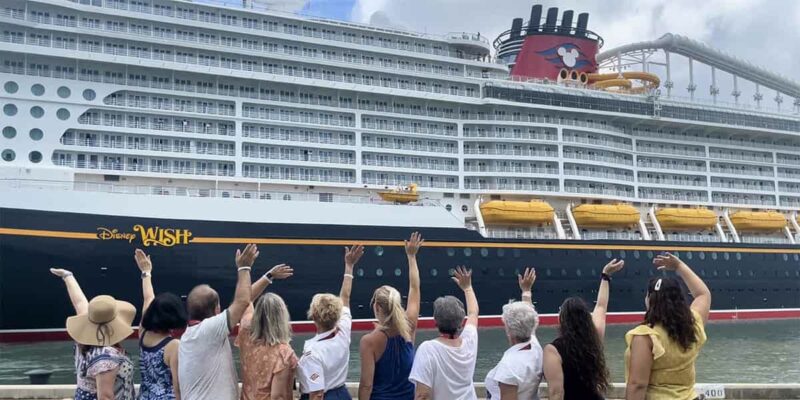 The Disney Parks have been crowded lately, especially as they transform for the Halloween and Christmas seasons. Regardless of the day of the week or the time of day, it seems like there is always a full house at Disney World, and especially Disneyland.

But when people still want a memorable trip and that same sense of magic that can be found at the Parks, minus the crowds, they may turn to alternative sources, such as a Disney Cruise Line vacation. However, it seems that in recent days there is no escaping the crowds, even on a cruise.

Reddit user chin06 recently took to this platform for advice on sailing on a Disney Cruise Line adventure, wondering if other Guests who had recently embarked on a similar journey experienced crowded ships:

My boyfriend and I are sailing on the Dream in 2 weeks! I was curious what the crowd situation is like on the cruises now that COVID restrictions and vaccination rules have been lifted somewhat. Have the cruises been super packed recently? Or is it like how it was during the height of COVID?

My boyfriend has a bit of an anxiety issues with crowds. We’ve already requested a quiet, out of the way table for our rotational dining and I’ll probably put in a request for that for Palo and Remy when we dine there.

But yeah, how has the crowd situation been like? We were thinking of checking out the Rainforest room at the spa as well – were there a lot of people?

Edit: Thank you to everyone for your response! I will try and plan accordingly but I’m sure it will be a fun experience overall despite the crowds.

Reddit commenters came to this poster’s aid, adding their experience with ships that seemed crowded.

User starrydomi gave some insight on the crowd levels based on research and personal experience:

So, I’ve been tracking the Fantasy for the past few months seeing how full they were sailing and based on what had been available to book online, they were already close to capacity even with all the restrictions.

Having been on 9 cruises before Covid, nearly every ship was always at max capacity and it really isn’t too noticeable, especially in the adult only areas. You’ll only find big surges of people at the old muster drills, between dinners as people are transitioning, or if you attend an atrium party like the tree lighting. The rainforest room is our favorite and we normally get a cruise length pass. It is especially quiet in the early mornings and late at night during dinner and shows.

We just got off the Wonder, 7 days. We were about 95% capacity. There were crowds at major events, as expected, but honestly there were some moments that I swear it was like early restart days with almost no-one around. I once walked from front of deck 9 to the drink station at aft 9 and I encountered no person other than crew. This was around 9pm? Never had that happen on any of our previous 13 cruises. Compared to our Carnival cruises, Disney had NO crowds. Now, I think the “classic” ships are known to be less crowded, but other hard-core Disney cruisers we chatted with said the ship was as busy as ever which surprised me. It’s also a reason we MAY actually book a 2nd Disney cruise, but on the Dream/Fantasy or even again the Wonder/Magic.

The character lines were “long” but honestly I’ve had longer waits for Pizza on Carnival than I did waiting in most of the character lines. 15-20 minutes, maybe 30 for the more rare characters. I just showed up as early as I could (maybe 20 minutes before they started) and I was in the first 1/2 of the line each time.

tldr; “crowded” is a relative term. What is “crowded” to me (see Carnival or Royal at many times of the day) may not be the same as “crowded” on Disney

These were the more detailed comments on this post, but other commenters provided helpful answers to the original poster. For instance, user Tuilere wrote:

Additionally, user AnotherLolAnon confirmed this for the Disney Dream:

Just got off the dream. It was full. Common areas were quite crowded and long lines for characters.

User Troile also weighed in with their experience on the Disney Wonder:

As of 2(ish) weeks ago on the Wonder, it was fully back to normal. So don’t count on lighter crowds though it may vary a little bit depending on the cruise.

These Disney Cruise Line Guests seem to believe that the ships are becoming just as crowded as the Parks, with longer wait times for certain experiences. However, each Guest had varying experiences with crowding, as some areas on the ships were more populated than others.

Have you been on a Disney cruise recently? What was your experience with crowds?