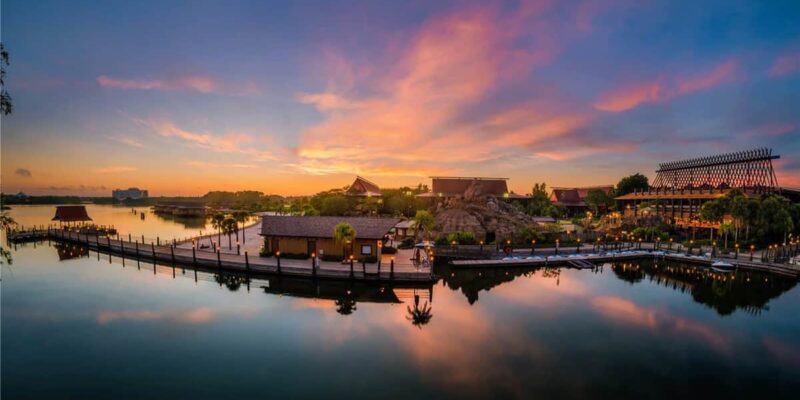 As the expansion of one Walt Disney World Resort continues, fans are calling out the House of Mouse for continued changes to their favorites, brandishing one construction project as worse than the divisive Splash Mountain retheme.

The development of Disney Parks worldwide seems to be happening at an accelerated rate, at least on the surface level. Since reopening after the pandemic closures, new attractions such as Remy’s Ratatouille Adventure and Guardians of the Galaxy: Cosmic Rewind at Disney World’s EPCOT have opened, lands like Avengers Campus at both Disneyland Resort and more recently at Disneyland Paris have launched, and new operations like the Disney Genie+, Lightning Lane, and Disney Premier Access FastPass replacement have come into effect.

While it feels like a lot has changed, there are multiple ongoing projects happening concurrently and after D23 Expo 2022 in Anaheim, Southern California, many “blue sky” projects are also being explored at Disney Parks, Experiences and Products including a proposed Encanto, Coco, and Villains area at Magic Kingdom Park in Disney World. The announcements generally caused excitement for most but beneath this, a murmur of frustration began as Disney failed to deliver any concrete plans for large-scale expansions at Walt Disney World or Disneyland Resort.

However, in circling back to the Central Florida Disney Resort, one project currently happening at Magic Kingdom is the new Disney Vacation Club (DVC) villas coming to Disney’s Polynesian Village Resort. Announced earlier this year, the DVC accommodation will replace the Spirit of Aloha Dinner Show at the Disney Park, but play homage to the experience once constructed. It is scheduled to be completed by late 2024 and will welcome Guests who are part of the Disney timeshare program.

With any change comes a flurry of differing opinions, and the building that will soon dominate the skyline at Disney’s Polynesian Village Resort has not escaped backlash. In fact, a popular thread has seen the development at the deluxe Resort being compared to the widely discussed retheme of Splash Mountain to Tiana’s Bayou Adventure.

SpingtimeMoonlight shared a meme to the Walt Disney World subReddit. The graphic of Tiana’s Bayou Adventure and the DVC villas at the Disney Resort hotel includes text saying:

Sigh… my poor Poly. from WaltDisneyWorld

The post has had over 1,200 upvotes and close to 300 comments with other Disney fans weighing on the change at Disney’s Polynesian Village Resort.

Yeah they ruined the beach/view with those Suite bungalow cabins on the water a bunch of years ago, now there’s gonna be this giant building next door that doesn’t really seem to fit. Bleh

The DVC Poly would be fine if it actually looked even remotely like a Polynesian architecture, which it does not. It might look fine if we are trying to recreate Oahu, but I am pretty sure that isn’t the idea. A new 4 story longhouse or two would have worked but no they had to have an 8 story tower to have more money. […] I would rather have to schedule for another resort than overcrowd or ruin the existing one. A new 8 story tower with almost no setback directly on lake will create light pollution as well as ruin the view. This is probably the least architecturally pleasing location or look I have seen for a Disney resort and that includes any of the Value resorts or the new generic glass box towers.

It should be noted that Marriott does have a footprint on Walt Disney World property. The popular Walt Disney World Swan & Dolphin hotels exist on Disney World land but are operated by Tishman Hotel Corporation and MetLife who in turn contract the running of the hotels, nestled between EPCOT Park and Disney’s Hollywood Studios Theme Park, to Marriott International. There are no plans for the DVC villas at Disney’s Polynesian Village Resort to be run by Marriott but the increase in higher-rise, seemingly non-themed towers across the Disney Resorts is calling the company’s imagination and vision into question.

By the time the villas open in Orlando, Walt Disney World will have wrapped up its 50th anniversary celebrations which saw the debut of Disney Enchantment over Cinderella Castle, and Harmonious at EPCOT’s World Showcase. Hopefully, the continued refurbishment of the former Future World in the latter will also be welcoming Guests by 2024.

What are your thoughts on the DVC villas at Disney’s Polynesian Village Resort? Let us know in the comments down below!