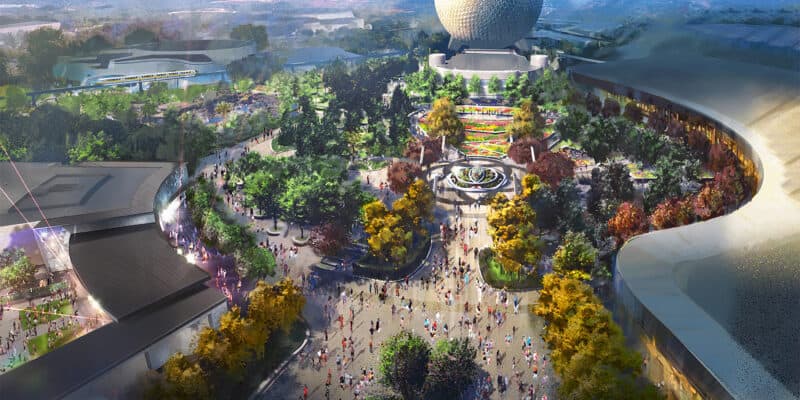 Years before the pandemic, information was sourced about a project titled the EPCOT Future World Hotel. Seemingly shelved, a new permit for the same address as the proposed Disney hotel has been filed by Buena Vista Construction Company — Walt Disney World’s in-house team.

EPCOT Park at the Walt Disney World Resort is the theme park that is undergoing the most work, as well as recently celebrating its 40th anniversary. In expanding Future World into three new areas, each consisting of old and new experiences and attractions, the continued development of the World Celebration and surrounding Spaceship Earth locations is a project that seems to have no end. Sure, fans can experience the shiny Guardians of the Galaxy: Cosmic Rewind but there is a hefty footprint of EPCOT space that remains closed.

In May, Disney Parks released new concept art for the destination that is set to include the festival stage area, Journey of Water (the Moana-inspired attraction), CommuniCore Hall/CommuniCore Plaza, and World Celebration. The images looked to be downgraded from what was previously shared by The Walt Disney Company, leaving some questioning just what the Disney Resort will look like once all is finished.

Excitingly, however, the Te Fiti monument, which will be the centerpiece of the Journey of Water attraction, was revealed at D23 Expo this year; the scale model is a perfect replica of the island deity from the 2016 Disney Animation Studios movie and will provide a new experience for Guests visiting the Central Florida Disney Park in the coming months.

While the construction continues at EPCOT, a permit has been filed for construction, maintenance, and labor at 1474 Avenue of the Stars — the address the previously rumored EPCOT Future World Hotel was registered for. The in-Park Disney hotel had an original filing for 1474-2000 Avenue of the Stars per plans shared by Ken Pozek last year. The plans show a published date in 2018, one in 2020, and a third in 2021 – -the last time the EPCOT Future World Hotel page was updated.

There is no concrete answer why a permit for a matching address has been filed, outside of the general work listed to be undertaken. However, with development at Disney World Resort and other Resorts worldwide only increasing in volume, it’s an interesting correlation even if it does not provide any specific answers.

An in-theme park hotel would be a good move for Disney World as competitor Universal Orlando Resort moves forward with the construction of its own within the brand new theme park, Universal’s Epic Universe. With an opening scheduled for 2025, Disney fans are becoming increasingly concerned about having no concrete plans for the collection of Parks in Orlando.

Even at D23, Disney Parks, Experiences and Products Chairman Josh D’Amaro embellished his presentation with “blue-sky” ideas including a Zootopia and Moana area, and Encanto, Coco, and Villains at Disney’s Animal Kingdom and Magic Kingdom, respectively, but confirmed no new rides, lands, or Parks during the panel.

Do you think EPCOT could benefit from an in-Park hotel? Let us know in the comments down below!