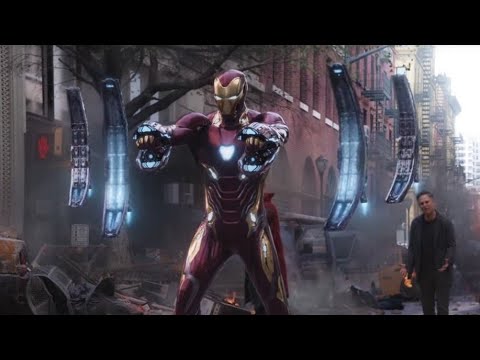 Days before Marvel’s next biggest update on the MCU, fans get a look back into the past with Avengers: Infinity War (2018) and how a certain scene almost made it into the movie.

Marvel VFX artists have revealed several deleted scenes that were once considered to be in the MCU but later got axed. Some of these scenes have been shockingly awful while others would’ve been amazing to see. For instance, Shang Chi and the Legend of the Ten Rings (2021) originally had Deadpool fighting at Xialing’s fight club, but Marvel decided to not go through with this.

With Infinity War, an artist who worked hard on the movie revealed that the action sequence in Edinburgh originally included James Rhodey/War Machine in the fight as he used an upgraded version of Stark’s holographic fight simulator.

After showing some pictures of the fight, the VFX artist, Phil Saunders shared this scene online and explained what the scene would’ve looked like with War Machine:

“Okay, yeah, it’s been forever! Too many projects in the hopper that have blackouts on them, so I’m digging in the dustbin for unused concepts. This is one from Avengers: Infinity War, where James Rhodes is fighting the battle of Edinburgh remotely, with his Tony Stark designed leg braces locked into a holographic control system for War Machine Mk. 4. Bruce Banner would have been piloting Hulkbuster (design by Josh Nizzi) in the battle against Proxima Midnight (courtesy of Jerad Marantz and Adam Ross) and Corvus Glaive (designed by Jerad Marantz and Ian Joyner) sadly the sequence was cut early on. Still it was fun to problem solve how to depict the overlap of the real and holographic action going on!”

This meant that the original fight would’ve included a Hulkbuster and a Iron Man robot helping Chris Evans’ Captain America fight Proxima Midnight and Corvus Glaive. While this scene would’ve been cool, it also would’ve shown how Tony’s use of Iron Man robots in Iron Man 3 (2013) had evolved into a cool software that would’ve let Rhodey fight abroad without leaving the compound.

Why the scene had to be reworked will stay a mystery since the movie easily could’ve included the two characters. Rhodey would’ve been alerted about the threat and saw that Vision and Wanda were in danger and sent his Iron Man robot to help in the fight.

Bruce also could’ve joined the fight as he went back to the compound before Captain America and his team arrived meaning that Banner could’ve had a bigger role in the movie. Instead, Hulk was barely in the movie and Rhodey’s role was limited.

Thankfully, Marvel has plans for both characters, but it was definitely a missed opportunity not to show off a cool side of Rhodey’s fighting style, but that doesn’t mean that Marvel won’t use this device again. For all we know, Armor Wars could show off this holographic method of fighting and be an interesting way to show how Rhodey operates on a global scale.

Here’s an official description of one of the biggest MCU movies:

As the Avengers and their allies have continued to protect the world from threats too large for any one hero to handle, a new danger has emerged from the cosmic shadows: Thanos. A despot of intergalactic infamy, his goal is to collect all six Infinity Stones, artifacts of unimaginable power, and use them to inflict his twisted will on all of reality. Everything the Avengers have fought for has led up to this moment, the fate of Earth and existence has never been more uncertain.

Do you think Marvel should’ve kept the scene in Infinity War? Let us know what you think!