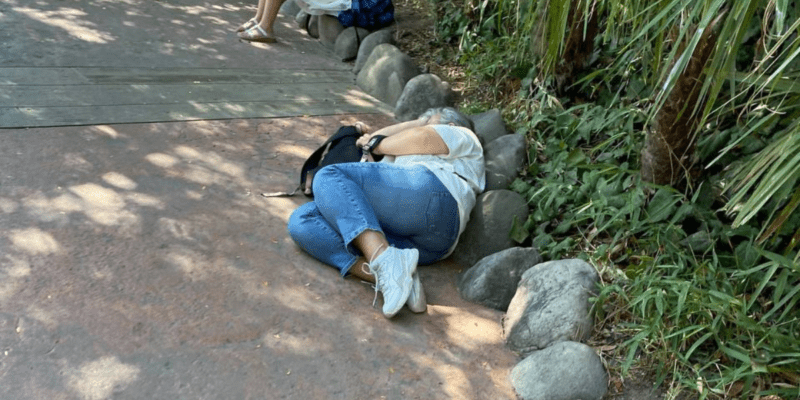 Is this Disney’s most boring theme park? This Guest apparently thinks so, as they were spotted taking the most expensive nap in the middle of the Park.

While there is so much for Guests to see and do at Disneyland Paris, especially since the Park is celebrating its 30th anniversary, it would appear that the Park was too boring for one Guest during their visit.

DLP GUESTS SHOW (@dlp_guests_show) recently posted an image of a Guest taking a not-so-comfortable nap in the middle of the Parisian Park, lying on the floor, and using a few decorative rocks for support.

What a great place to take a nap

The scene undoubtedly caused confusion and surprise among Guests who encountered this person sleeping in the middle of such an exciting place, and reactions online were just as stunned to see this incident. User @noah_ravenswood commented that they were shocked to see someone taking a nap at Disneyland Paris, “She paid 130 € just to take a nap?” Noah said, in complete disbelief of this Guest’s actions.

User @EtienneBinot commented that they agreed this wasn’t the best idea but was thankful this Guest stayed in one of the accessible areas of the Park in contrast to some other incidents that apparently are common in the Parisian Disney Park. Inside the Magic recently reported on a Guest who shamelessly pulled out a pillow and jumped a fence to take a nap in a restricted area, for example. You can read more about this story here.

Understandably, Guests are tired after experiencing all the joy and thrills Disneyland Paris offers. Maybe this Guest decided to take a nap in the Park because they were tired, as not much context was given in the original tweet. Regardless of the reason, it is surprising to see someone deciding to take a power nap on the floor in such a beautiful Disney Park, especially in such an uncomfortable place.

Guests have a lot of freedom to experience and enjoy Disney Parks as they please, from riding every attraction to hugging their favorite character, viewing one of the fun parades, enjoying their favorite snacks, and, of course, taking a well-deserved break. However, there are certain rules and regulations set by Disney that Guests must be aware of during their visit, as breaking them could result in being kicked off property, banned for life, or in some instances, being arrested.

You can click here to learn more about the rules at Disneyland Paris.

Related: Despite Control Measures, Guests Continue to Break the Rules at Disney Park

What do you think about this incident? Have you ever fallen asleep visiting a Disney Park? Let us know in the comments below!