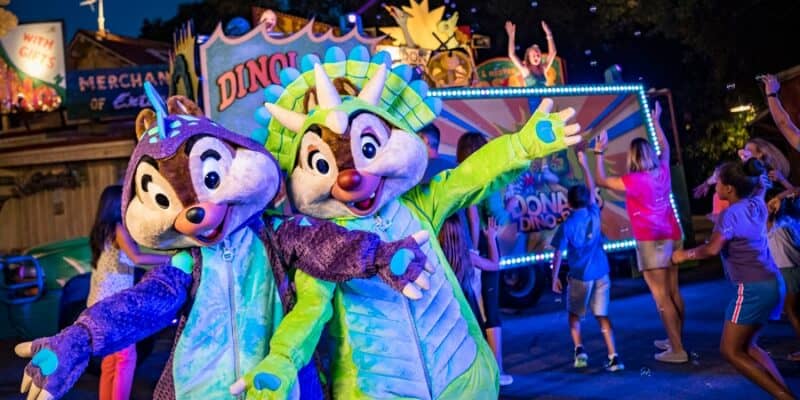 Get ready and join beloved characters for a prehistoric party returning to Disney’s Animal Kingdom this month!

Guests visiting Disney’s Animal Kingdom will have the chance to meet Donald Duck, Daisy Duck, & Chip ‘n’ Dale, who will return to the Park this month! They are ready to throw a prehistoric party over 200 million years in the making. They are all dressed up in their iconic dino-inspired outfits to return to DinoLand U.S.A. on September 4.

DinoLand was previously home to the steel Wild Mouse roller coaster, Primeval Whirl, and currently houses the TriceraTops Spin ride and numerous carnival games. When Primeval Whirl was demolished to create a seating area and Donald’s Dino-Bash! failed to return when Disney World reopened after its pandemic closure, many fans thought the site was in for a retheme — some even suggested that Raya and the Last Dragon (2021) characters and rides should take over the space.

However, these remain pure speculations, at least for the time being, as Disney continues to show its commitment to the popular area at the Park, especially with the return of Donald’s Dino-Bash!

Reach Out for a Warm Embrace

If up-close encounters are more your thing, you’ll definitely want to make a pit stop in DinoLand U.S.A. when Donald Duck, Daisy Duck, and Chip ‘n’ Dale return on Sept. 4 … and yes, the chipmunks will be in their iconic dino outfits! Just across the river at Adventurers Outpost, world travelers Mickey Mouse and Minnie Mouse have once again opened the doors of their exploration headquarters and are ready to pose for a postcard-worthy photo as they prepare for their next expedition.

As you can see, there is no shortage of ways to have wild times with your Disney friends at Disney’s Animal Kingdom.

Donald Duck just heard the news—some of his feathered ancestors were dinosaurs! To mark this inquackable discovery, he’s transformed this land into a celebration for the ages.

Are you excited to meet Donald, Daisy, and Chip ‘n’ Dale at DinoLand U.S.A.? Let us know in the comments below!