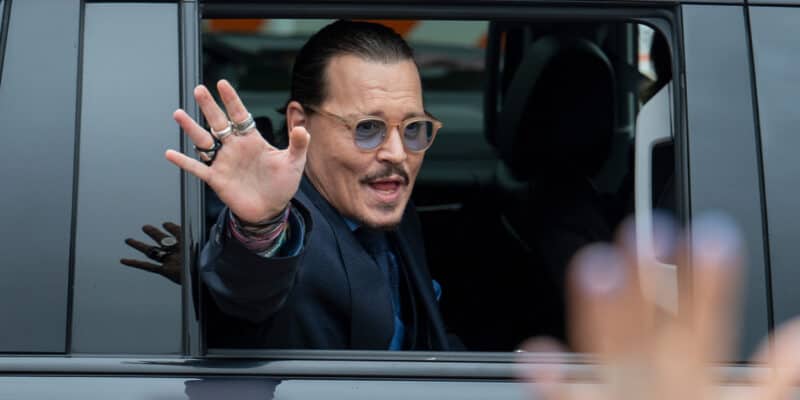 Actor Johnny Depp has once more rattled the Internet as the first look of his first role following the dramatic and highly-publicized defamation trial against his ex-wife, actress Amber Heard has been officially released.

Once the jewel of The Walt Disney Company’s swash-buckling crown, and with a hefty catalog of acclaimed performances to boot, Depp has become exiled from Hollywood in recent years.

Depp’s marriage to The Rum Diary (2011) co-star, Amber Heard, in 2015 would begin a sequence of events never to be forgotten in pop culture. Depp’s anchoring of the Pirates of the Caribbean franchise, where he played the beloved role of Captain Jack Sparrow – and has since 2003’s Pirates of the Caribbean: The Curse of the Black Pearl – would become unmoored following allegations of domestic abuse and domestic violence from Heard.

Since Heard’s Op-Ed in The Washington Post in 2018, an essay in which she never named Depp but alluded to him being the source so much so that the actor issued a $50 million defamation suit against Heard, Depp has been let go from Disney’s billion-dollar Pirates franchise.

After a tumultuous time in court, Depp has since regained some of his previous public standing, at least in the eyes of the industry. The actor joined musician Jeff Beck on stage in Sheffield, UK amid the trial proceedings, before continuing on the European leg of the tour including London’s Royal Albert Hall. His 2020 movie, Minamata, proved Depp still had a plethora of support in Europe and in smaller-scale movies with his next film, Maïwenn’s Jeanne du Barry (TBD) causing excitement at this year’s European Film Market in Berlin.

Now, the first look of Depp in the role of controversial King Louis XV has been revealed.

Maïwenn’s next ambitious film is described as (Per Deadline):

Born into poverty, [Jeanne du Barry] is a young working-class woman hungry for culture and pleasure who uses her intelligence and allure to climb the rungs of the social ladder one by one.

She becomes Louis XV’s favorite companion. Unaware of her status as a courtesan, he regains his appetite for life thanks to their relationship. They fall madly in love. Against all propriety and etiquette, Jeanne moves to Versailles, where her arrival scandalizes the court.

Alongside directing and writing, Maïwenn will star as the titular character alongside Depp’s King Louis XV in the French-language film.

Shooting began at the end of July across locations like Versailles and other chateaux around Paris and will take place for 11 weeks. Why Not Productions is handling the film and Netflix has apparently already acquired streaming. You can view the first look at Depp’s character below:

More on Depp and Hollywood

His loss of the libel trial against British tabloid The Sun, executive editor Dan Wootton, and parent group, News Group Newspapers at the London High Court also left him out of playing the dark wizard Gellert Grindelwald in JK Rowling’s Harry Potter spinoff series, the Fantastic Beasts franchise. Depp was replaced by Mads Mikkelsen for the latest installment, Fantastic Beasts: The Secrets of Dumbledore (2022). The November 2020 ruling by Justice Andrew Nicol found many of the domestic violence claims about Depp “substantially true”.

But, despite Depp’s loss of Pirates and Fantastic Beasts due to Heard’s domestic abuse allegations, fans have stayed loyal to the Hollywood star with trends like #JusticeForJohnnyDepp often exploding online. This is not because Depp fans stand with an abuser, no, it is that they believe Heard has lied about domestic incidents and Depp has said time and again it was him that was the subject of abuse. Conversely, though, the slew of support from other prominent celebrities has seemingly started to be withdrawn.

Related: “Disturbing,” ‘Pirates of the Caribbean’ Co-Star Speaks Out on Johnny Depp Trial

June 2022 saw a win for Depp as the jury in the Fairfax County, Virginia defamation suit, presided over by Judge Penney Azcarate, found Heard guilty of defamation and ordered the Aquaman (2018) actress to pay Depp over $10 million in damages. Depp was also found guilty, via his former lawyer, of defaming Heard and subsequently ordered to pay his ex-wife $2 million. Despite rumors of high-profile celebrities like James Franco and Elon Musk slated to testify, it would be people like Kate Moss, Depp, and Heard that would take the stand. Camille Vasquez and Benjamin Chew handled Mr Depp’s defense in the Heard trial, while Elaine Bredehoft led Ms Heard’s case.

Margot Robbie may be tapped for the Pirates saddle, but as Depp steps further into the spotlight, it could only be a matter of time before the actor fully returns to the Hollywood blockbusters.

Will you be watching Maïwenn’s Jeanne du Barry? Let us know in the comments down below!