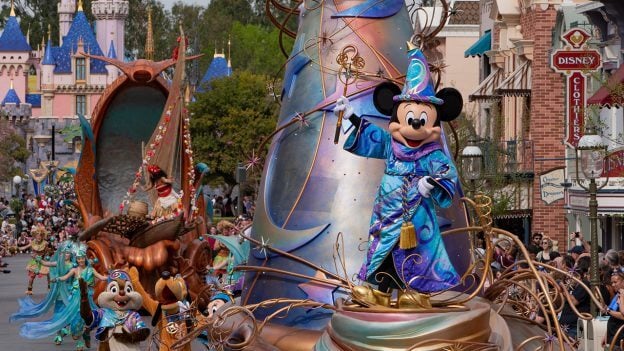 The new Magic Happens parade officially debuted on February 28, 2020 at Disneyland Park. This was the first daytime parade at Disneyland in over a decade, so it’s evident as to why Disneyland Guests were so excited to see this come to life.

Unfortunately, just weeks after Magic Happens debuted, the Parks had to shut down due to the ongoing pandemic temporarily.

When Disneyland finally reopened in April 2021, some amenities — including FASTPASS, Disney MaxPass, Magic Mornings, and Extra Magic Hour offerings — were suspended as part of the phased reopening efforts amid the pandemic. Also suspended were parades and other select entertainment offerings — including Magic Happens.

What’s interesting, though, is last year Disney told reporter Scott Gustin that Magic Happens “may” return at a later time, indicating we may have already seen the last of this fan-favorite parade. Many would be sad to see Magic Happens never return to Disneyland Park as it only had a few weeks to run prior to the temporary Park closures, which took place in March 2020.

Although we do not have confirmation if Magic Happens will return to Disneyland next year, what we do know is Disneyland is currently looking for performers for a 2023 parade.

Disney Auditions recently posted a listing as they are searching for parade performers and look-alike roles for a future parade. Rehearsals won’t begin until January 2023 meaning the parade won’t debut until next year.

Seeking the following:
Individuals of ALL heights for dancer & look-alike roles. Looking for technically strong trained dancers who are comfortable learning many styles of choreography. Must be adept at making an emotional connection with the audience. Performers should be willing to demonstrate a full range of body movement and animation skills.

This could be for the return of Magic Happens, a brand-new parade for the Walt Disney Company’s 100th anniversary, or something else.

Inside the Magic will keep you updated as we get more information regarding the future parade Disneyland.

Do you hope to see Magic Happens return to Disneyland? Let us know in the comments below.

Comments Off on Disneyland Is Hiring Performers For 2023 Parade