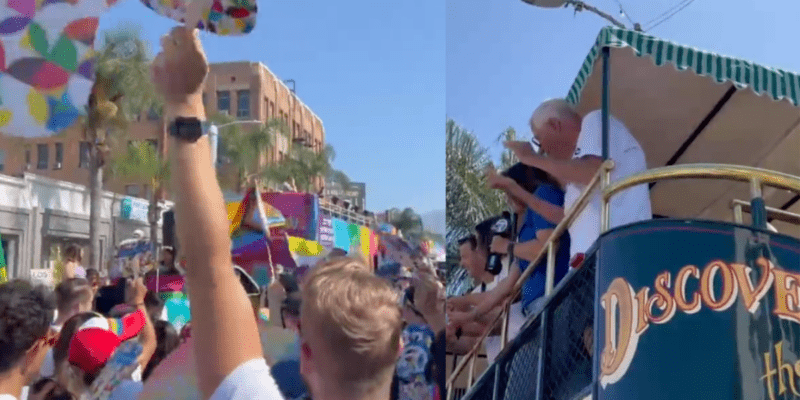 The Los Angeles Pride Parade took place on Sunday, marking the first event in two years due to the ongoing COVID-19 pandemic.

Disneyland joined the celebration again this year, driving an original Disneyland omnibus vehicle down the parade route. Disney Legend Bob Gurr was aboard the bus, which he helped design in the 1950s. @cheltonjim on Twitter shared a video of the omnibus among excited Pride-goers:

The one & only Bob Gurr is here celebrating #LAPride! So excited to be here with Disney!

The one & only Bob Gurr is here celebrating #LAPride! So excited to be here with Disney! pic.twitter.com/gjI6w1xX64

Bob Gurr helped Walt Disney design Disneyland and is responsible for some of the Park’s most beloved attractions, like the Autotopia vehicles and the Omnibus itself.

In 1981, Gurr retired from Disney and opened an animatronic firm, Gurr Design, Inc. Later, he opened the Sequoia Collective with another former Imagineer, Dave Schweninger.

Members of the LGBTQIA+ community were frustrated with Disney’s response, which doesn’t directly mention or condemn Florida’s “Don’t Say Gay” bill. Pixar staff wrote The Walt Disney Company a letter asking the company to take a stronger stance against the bill.

DeSantis allegedly warned The Walt Disney Company not to get involved with the law, saying it wouldn’t go well for them. He quickly made good on his word, introducing and passing legislation to dissolve Disney’s Reedy Creek Improvement District, effective in 2023.

Additionally, Republicans around the United States have introduced legislation to revoke other legal privileges held by The Walt Disney Company, like No-Fly Zones over the Disney Parks and copyright protections that protect characters like Mickey Mouse.

With a float at Los Angeles Pride, The Walt Disney Company stands firm in supporting LGBTQIA+ fans and Cast Members.

What do you think of the omnibus at L.A. Pride? Let us know in the comments!