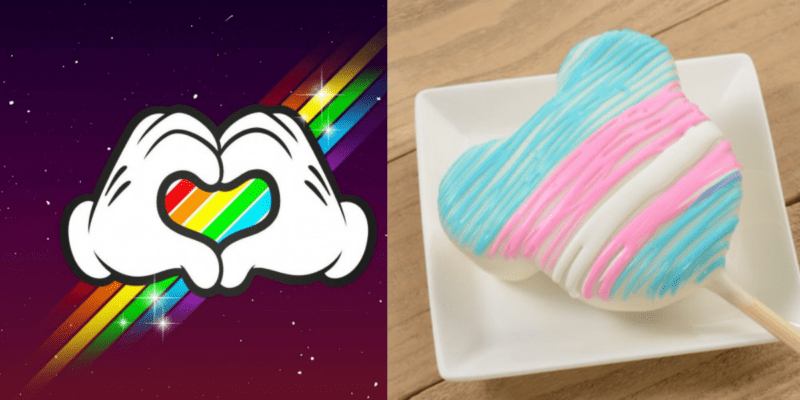 It’s Pride Month, and Walt Disney World is already rolling out the celebrations!

Disney is known for releasing rainbow merchandise in June and the occasional rainbow-themed snack, but they’ve gone all out this year. Until June 30, 2022, Disney is donating 100% of the proceeds from its Pride collection to organizations that support the LGBTQIA+ community. It’s notably also the first-ever officially titled “Pride collection.” In previous years, the collection was titled “Rainbow Disney.”

The Disney Parks Blog has also released a “Foodie Guide” for Pride Month at the Disney Parks. Among the delicious treats coming to Walt Disney World is Disney’s first-ever transgender flag-themed treat, a cake pop!

If you’re hoping to get your hands on a Mickey Pride cake pop, they’ll be available at various outdoor vending stations around Magic Kingdom Park at the Walt Disney World Resort. These special treats will not be available at Disneyland Resort.

Amid tension with its home state of Florida and Governor Ron DeSantis following the Parental Rights in Education Act – also known as the “Don’t Say Gay” bill – Walt Disney World is not backing down in support of its LGBTQIA+ fans and Cast Members.

If you’ve got a sweet tooth, prepare for a month of limited-time fun at Walt Disney World Resort. At Fantasyland’s Cheshire Café in Magic Kingdom, Guests can indulge in a Pride Key Lime Tart!

The Pride Month celebrations extend throughout the Walt Disney World Resort. At EPCOT, Guests can try a Pride Liege Waffle at Connections Café and a Pride Cake at Kringla Bakeri Og Kafe in the Norway World Showcase Pavilion.

At Disney’s Hollywood Studios, head over to ABC Commissary or Backlot Express for a Pride Cupcake, or try a Pride Dome Mickey Hat at either Rosie’s All-American Cafe or The Trolley Car Café. In Toy Story Land, Guests can try a Pride Lunchbox Tart!

What Pride Month treat are you most looking forward to at the Walt Disney World Resort? Let us know in the comments.