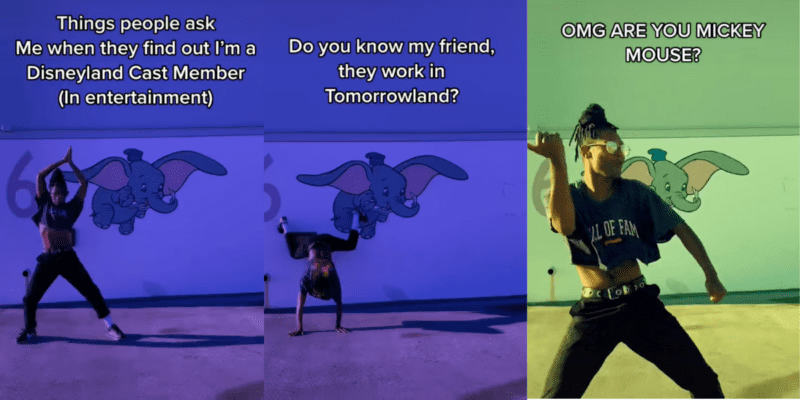 Many different types of Cast Members work together to keep Disneyland Resort “The Happiest Place on Earth.”

Entertainment Cast Members perform in parades, shows, meet-and-greets, and other Disney Park attractions and special events. One such Disney Cast Member, @blackgirlgrape, has performed at Disneyland Resort for 12 years. He shares his personal and professional life on TikTok.

When his followers discover he is an entertainment Cast Member at Disneyland, they have many questions. In an upbeat dancing video, @blackgirlgrape shared some of the most “exhausting” questions they receive:

The first question is, “Do you have any tickets? Can you get me in?” The Cast Member runs past the camera flashing their middle finger as a response.

Next up is, “Do you know my friend? They work in Tomorrowland.” In the comments, the Cast Member commiserated with another Cast Member, @lawbo1, who wrote, “I dont know your friend! Theres like 20,000 ppl working here! Lol.” “RIGHT,” he replied.

The last question is, “OMG ARE YOU MICKEY MOUSE?” The Cast Member shakes his finger.

A former Walt Disney World Resort entertainment Cast Member commended @blackgirlgrape for 12 years with Disney, writing that they left after ten, “Dang and you still going! Good for you! My body couldn’t take it any more lol.”

“I’m getting there sis,” he responded.

It’s important to note that @blackgirlgrape doesn’t speak for The Walt Disney Company or the brand.

What questions would you ask a Disneyland Resort entertainment Cast Member?