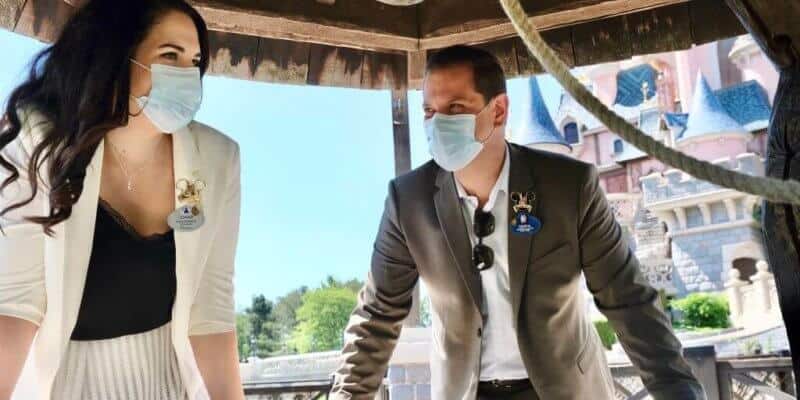 Disneyland Paris — home to Disneyland Park and Walt Disney Studios Park — originally reopened its theme parks on July 15, 2020 following its first closure due to the ongoing pandemic. However, theme park officials then made the decision to close for a second time in October 2020 due to French government regulations. Originally, Disneyland Paris aimed to reopen on February 13, 2021, but that was not the case.

In fact, come January 2020, the theme parks had to push that originally anticipated reopening date back, again due to French restrictions.

The good news is that now, as we continue to move forward amid the ongoing pandemic, Disneyland Paris has announced that they will officially reopen Disneyland Park, Walt Disney Studios Park, Disney’s Newport Bay Club Hotel, and Disney Village on June 17!

Now, as we are only a few days away from the reopening, Disneyland Paris is welcoming back some of its Cast Members! The DLP Ambassador took to Instagram to share this exciting news:

Look who are back! Cast are gradually returning onsite to prepare our Resort for its long-awaited reopening! Stay tuned as I’ll be sharing more of these the coming days… ?✨

It is so exciting to see Cast Members returning to work at Disneyland Paris. We know it has been a long road, but we cannot wait to see the magic being spread once again at the theme parks come June 17!

Once Disneyland Paris reopens on June 17, Guests will be able to meet with Disney characters via the Selfie Spots around the theme parks as well as check out a new Star Wars Legends experience. Additionally, the Cheshire Cat Express Train featuring friends from Alice in Wonderland will also be added to the park!

And for those Pixar and Marvel fans, get ready for two new experiences — Cars ROAD TRIP and Disney’s Hotel New York – The Art of Marvel.

Guests are excited to get back into the magic of Disneyland Paris, with new and returning experiences — But keep in mind that Guests must abide by the new safety protocols. Before visiting the theme parks, be sure to visit the Disneyland Paris website and familiarize yourself with the health and safety rules.

Are you excited to see Disneyland Paris reopening? Will you be visiting? Let us know in the comments below.

Want to visit Disneyland Paris on your next vacation? Start planning today!

Comments Off on Cast Members Return Ahead of Disneyland Paris Reopening