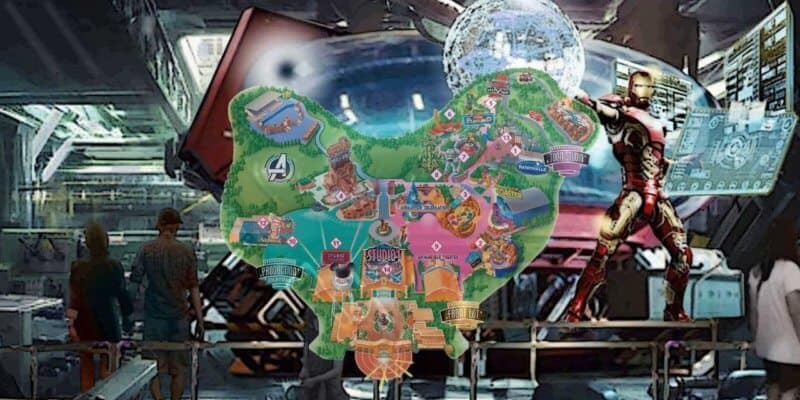 Disneyland Paris — home to both Disneyland Park and Walt Disney Studios Park — has a lot of construction projects currently in the works. Due to this, the theme parks had to make the decision to close certain attractions, including Rock ‘n’ Roller Coaster and Moteurs… Action! Stunt Show Spectacular — to make way for the newer attractions such as the highly anticipated Iron Man coaster!

Now, Disneyland Paris is making updates to its Walt Disney Studios Park map to showcase the most up-to-date information for those wishing to visit.

It looks as though the Walt Disney Studios Park map no longer shows the Backlot or Moteurs… Action! Stunt Show Spectacular logo as both of these experiences have come to an end to make room for the construction projects currently in the works. Additionally, the upcoming Cars Road Trip attraction no longer features Route 66.

You can see the updated brochure in the Tweet below, courtesy of DLP Report.

⚠️ The Walt Disney Studios Park map has just been updated in the latest brochure once more.
Backlot and Moteurs Action logos are no longer featured, and Cars Road Trip no longer mention “Route 66”. pic.twitter.com/wx5S9LI7EY

As for what could be added to the map soon, Guests can look forward to a few things! For starters, in 2018, Disneyland Paris announced that there is a $2.4 billion multi-year expansion coming soon to Disneyland Paris and Walt Disney Studios Park. A new Star Wars- themed land (Star Wars: Galaxy’s Edge), an area for the Marvel Universe (Avengers Campus), and a new fully immersive Frozen land are all currently slated to debut at the Paris theme parks in the future.

Additionally, the highly anticipated Iron Man-themed coaster will be part of Walt Disney Studios Park soon! In case you missed it, Disneyland Paris originally announced plans for the upcoming Iron Man coaster at D23 Expo Japan 2018 and is set to be part of the new Marvel-themed land at Walt Disney Studios Park. The only details shared by Disney executive Bob Chapek at the time was that the upcoming coaster will be “a high-speed, hyper-kinetic adventure where Guests will team up with Iron Man and their favorite Avengers.”

As construction continues on this upcoming attraction, the Walt Disney Studios Park map could be making way to feature the Iron Man coaster in the near future.

At this time Disneyland Paris — home to both Disneyland Park and Walt Disney Studios Park — remains closed due to the pandemic. The Paris Resort originally reopened to Guests on July 15, 2020, following its first pandemic-related closure, but theme park officials made the decision to close for a second time in October due to French government regulations, with a reopening date originally slated for February 13, 2021. However, in January, they decided to push that anticipated reopening date back to April, again due to French restrictions.

In March 2021, that date once again got pushed back due to “prevailing conditions and travel restrictions across Europe”, and the Disney Park does not have a new anticipated reopening date at this time. Inside the Magic will keep you updated as we get information surrounding Disneyland Paris and its reopening.

Do you plan on visiting Disneyland Paris when it reopens to Guests? Let us know in the comments below.