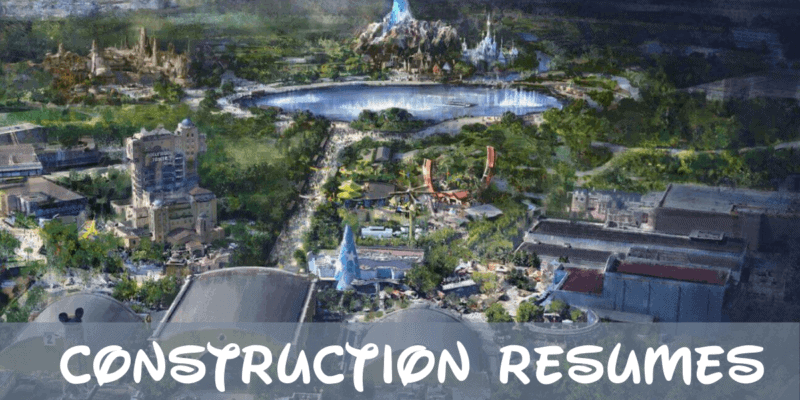 Construction has resumed at the Disneyland Paris Resort. After being shuttered for several weeks due to the global pandemic, footage of construction progress is now available for Walt Disney Studios Park.

Captured and shared by Twitter user, @DLPReport, we see construction cranes operating from a safe distance.

? Construction has finally resumed today on the Walt Disney Stufios Park expansion project, with the “Spider-Man Crane” swinging back into action! #WDS2 pic.twitter.com/jCzpqlu9e1

It appears that the crane is being utilized for construction of the Marvel-themed land, Avengers Campus.

? Plenty of activity has returned to the Avengers Campus site #WDS2 pic.twitter.com/ItAbV3vQdL

But this is not the only sign of construction spotted on the property. DLP Report also shared that construction has also recommenced on Disney’s Hotel New York – The Art of Marvel.

? Construction at Disney’s Hotel New York – The Art of Marvel has also restarted. No new opening date has been set yet. pic.twitter.com/8wqIV2996g

This news follows Disneyland Paris’ announcement to begin reopening its theme parks on July 15, the same day the Walt Disney World Resort plans to reopen two of its own theme parks, EPCOT and Disney’s Hollywood Studios.

Disneyland Paris has the following statement posted on its website:

Disneyland Paris announced a phased reopening of the resort as of 15th July 2020, starting with both theme parks, Disney’s Newport Bay Club hotel and Disney Village.

The phased reopening will introduce enhanced health and safety measures implemented for both Cast Members and guests. Theme park capacity will be limited to comply with governmental requirements, Disneyland Paris will manage attendance through a new online theme park reservation system available as of early July and subject to availability.

To provide guests with maximum flexibility, new booking conditions are now available. Find information about the reopening of Disneyland Paris.

There is still no word yet on how far the Walt Disney Studios Park has been delayed because of the shutdown.

Are you excited for Walt Disney Studios Park to be completed? Which new land are you most looking forward to exploring? Let us know in the comments!