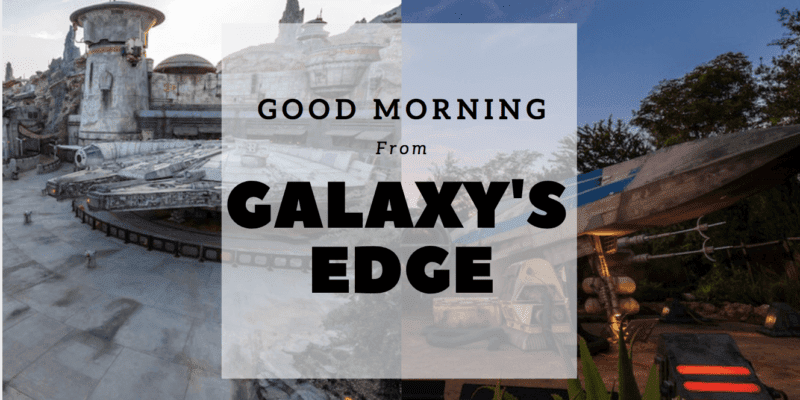 Mondays can be rough, but the Disney Parks team is here with stunning sunrise pictures from around Star Wars: Galaxy’s Edge to get your week off to a good start. Batuu is beautiful at first light and these images will make you feel like you’re walking through the gates of Disneyland or Disney’s Hollywood Studios right now. Bright suns!

The first two Galaxy’s Edge sunrise photos show Han Solo’s Millennium Falcon from different angles. Sitting at the entrance to the Smuggler’s Run attraction, the morning light makes the Falcon look fantastic (even though Chewbacca probably has 100 repairs to do!)

Next, we travel to Batuu’s resistance encampment, where the sun is rising over two fighters. This A-wing starship looks ready to take flight with the early morning light peeking over the horizon!

Close by, an X-wing starfighter sits waiting for its pilot to take it for an AM spin around the galaxy. We’re going to pretend it’s Poe Dameron’s ship, even though BB-8 is nowhere to be seen.

This isn’t the first time the Disney Parks team the been trying to ease the transition from the weekend with gorgeous sunrise photos from around Disneyland and Walt Disney World.

First, the Disney Parks Blog showcased castle sunrise pictures that are sure to add some magic to your morning. Then, the team shared a #DisneyMagicMoments post featuring beautiful photographs of Animal Kingdom first thing in the morning.

If you’ve been missing Disney’s theme parks as much as we have, this Disney sunrise photo series is the perfect way to imagine mornings in the parks until they reopen. If you try hard enough, you can even imagine the sunshine hitting your face while you sip a Joffrey’s coffee!

To plan your perfect Walt Disney World Resort or Disneyland Resort vacation after the gates reopen, contact the Authorized Disney Vacation Planners at Academy Travel. Their skilled team will help you book everything for your ideal Disney trip, from drinks at Oga’s Cantina to an onsite hotel room you won’t want to leave!