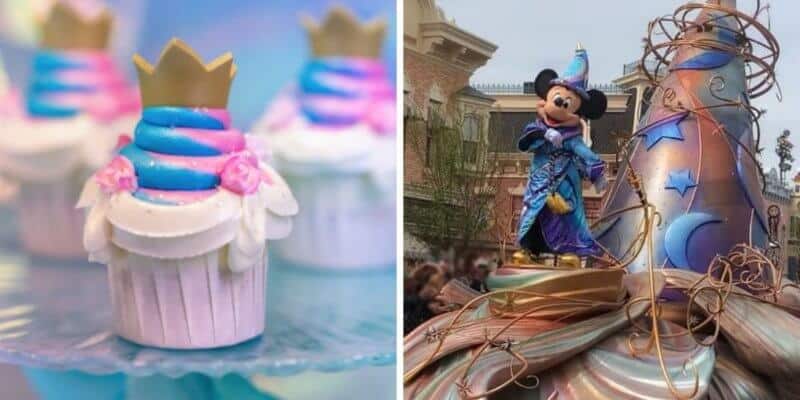 The new Magic Happens parade officially makes its debut today, February 28, 2020 at Disneyland Park. This is the first daytime parade at Disneyland in over a decade, so it’s obvious as to why Disney is bringing all of the magic to their celebrations.

With brand new merchandise to delicious food items, Disney is ready to wow guests with some magic.

One treat, in particular, is standing out which we feel is a must try if you are visiting Disneyland Park in the near future.

Disney guests looking for something to satisfy their sweet tooth while enjoying the new Magic Happens parade should check out Jolly Holiday Cafe. The Royal Cupcake has made its debut and it is extremely tasty.

The Royal Cupcake is a vanilla cupcake with buttercream icing and lots of colors! It is designed to represent Princess Aurora, from Disney’s animated film, Sleeping Beauty. “Make it pink — Make it blue”!

Disney guests who were visiting the park on February 27 were in for a real treat when Disneyland surprisingly ran a special “first look” route of the new parade, which you can read more about here.

Inside the Magic was even there to share a live stream of the event, which you can check out here!

With brand new magical floats featuring characters from Moana, Frozen 2 and Coco, along with original music co-composed by Todrick Hall, the new Magic Happens parade brings together both modern and classic Disney characters and stories to life, making it fun for all ages.

Do you want to visit Disneyland Resort on your next family vacation to watch the new Magic Happens parade, but aren’t sure where to begin planning? Don’t hesitate to reach out to our trust-worthy friends over at the Authorized Disney Vacation Planners at Academy Travel for a free quote.

Are you excited to see the new Magic Happens parade make its debut? Let us know in the comments.