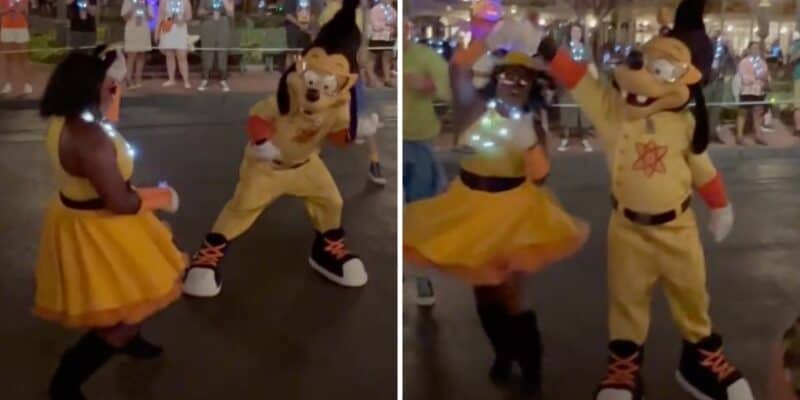 “This is the magic of Disney,” influencer Rozy of Rozy’s Magical World wrote after a recent Disney parade experience left her in tears.

Rozy has more than 1.2 million followers on TikTok and another 40 thousand followers on Instagram, all of whom revel in her daily Disney content featuring creative Disney bounds, hilarious Park anecdotes, special character interactions, and so much more. She is also an avid mental health advocate, graciously sharing her own struggles with the masses to remind them that “life is worth fighting for.”

Among some of her most viewed videos are those showcasing her seriously impressive Disney fashion. Her outfit inspired by Goofy’s signature look had the character bowing down at her feet when he saw her.

And then there was the time that she met Winnie the Pooh in an outfit that honored his familiar likeness.

But it was her Mickey’s Not-So-Scary Halloween Party costume that had her seeing “Eye to Eye” with one popular character.

The ever-popular Mickey’s Not-So-Scary Halloween Party returned this year and Guests can’t get enough of the seasonal spectacular, which hasn’t been offered since before the Covid-19 pandemic. It is already completely sold out for the month of August, with the remaining dates filling up fast.

The party is a ticketed event with exclusive offerings such as the Hocus Pocus Villain Spelltacular, Disney’s Not-So-Spooky Spectacular, The Cadaver Dans Barbershop Quartet, and of course, Mickey’s “Boo-to-You” Halloween Parade.

The infamous parade treats Guests to a frightfully fun cavalcade of party-exclusive characters in special costumes, such as the Hitchhiking Ghosts from The Haunted Mansion, the Pirates of Adventureland, and “a wicked assortment of Disney Villains,” per Disney’s official description.

Fans have been most excited about the addition of Goofy’s son Max to the Halloween parade lineup. Throughout the night he can be seen dressed in Powerline attire, a nod to the famous popstar he idolizes in A Goofy Movie (1995).

This was the inspiration for Rozy’s Halloween party get-up, and Max took notice.

As he made his way around the Magic Kingdom, he paused for a spontaneous dance party with Rozy. Side by side, they completed Powerline’s notorious choreography in unison to the tune of the film’s song “Eye to Eye.”

They rocked out with air guitars and spun each other around in a parade experience that surely neither of them will forget.

Rozy’s TikTok video in which she shares the encounter has almost reached 200 thousand views and counting. You can view the video below, or by clicking here.

Join some favorite Disney Characters for an evening of spirited fun.
Get your favorite costume ready! Come collect candies and treats while Magic Kingdom park thrills and chills you with eerie entertainment, delightful attractions and some beloved Disney Characters.

Throughout the evening, you can:

Set your sights on the Hocus Pocus Villain Spelltacular! Watch 3 sinister sisters bewitch and bedazzle the residents of Magic Kingdom park.
Witness Disney’s Not-So-Spooky Spectacular—a wickedly wild fireworks display featuring some of your favorite Disney Characters and hosted by Jack Skellington from Tim Burton’s The Nightmare Before Christmas.
Boogie down at the Disney Junior Jam at Storybook Circus—featuring some favorite friends from Disney Junior shows. It’s perfect for young partygoers!
See some beloved Disney Characters during Mickey’s Boo-to-You Halloween Parade.
Collect a bag full of candy as you roam the trick-or-treat trails in search of some of your favorite sweets.
Revel in the extraordinarily enchanting atmosphere of Magic Kingdom park during this limited-capacity event.
Best of all, this event is “not-so-scary”—so children of all ages can join in the fun!

Have you been to Mickey’s Not-So-Scary Halloween Party? What was your favorite costume or special event? Tell us in the comments below.