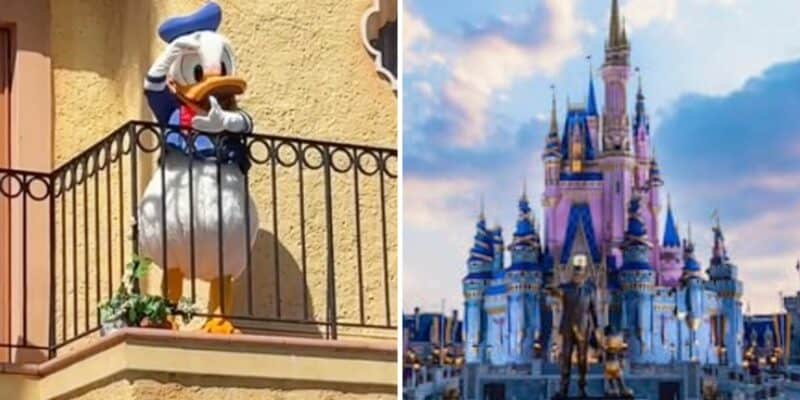 In yet another example of characters going the extra mile during Guest interactions, Donald Duck’s latest gesture brought a family to tears.

From a balcony overlooking a crowd of Guests vying for Donald’s attention, he spotted a couple with their young daughter communicating using American Sign Language (ASL).

What he did next left the family “with all the goosebumps.” Through tears, they shared the sweet exchange on social media.

Ok Disney really IS the most magical place on earth! Charly was beaming ear to ear and daddy and I were in tears (with all the goosebumps!) THANK YOU DONALD! #asl #deaf #disneyworld #asldisney

Ok Disney really IS the most magical place on earth! Charly was beaming ear to ear and daddy and I were in tears (with all the goosebumps!) THANK YOU DONALD! #asl #deaf #disneyworld #asldisney

TikToker Christy Keane’s video opens with a waving Daisy Duck and a caption that reads “Donald Duck noticed us signing with our deaf daughter at Disney World and then this happened.”

To the couple’s surprise, Donald had been learning to sign using ASL and was excited to be able to communicate with them. He locked eyes with their little Charly and asked her how old she was, to which she signed “5 years old.”

“Wow! You’re a big girl!” Donald signed to a beaming Charly. “Have a good day!”

The comment section is filled with more than 1,000 compliments for the Cast Member, thanking them for providing such a magical experience for Charly and her family.

“This literally made me tear up,” one user commented. “Disney is such a magical and beautiful place filled with so much love! I love seeing it play out like this.”

Others urged the parents to acknowledge the Cast Member with a complement using the My Disney Experience app.

There have been several reports of these types of exchanges lately. ABC reported that 11-year-old Zoe Tapley had a similar experience with Princess Anna on a recent trip to Disneyland.

Tapley shared that she had encountered the occasional Cast Member who knew ASL basics in the past but was blown away by Anna’s depth of ASL knowledge. “They engaged in a full ASL conversation about Zoe’s favorite rides at Disneyland and how she had been adopted from Congo,” ABC wrote.

In addition to learning ASL, Cast Members appear to be increasingly in tune with the needs of their young Guests. Mickey recently spent some extra time consoling a military toddler who was suffering from separation anxiety. Minnie doubled back to spend one on one time with a young Guest using a walker who couldn’t keep up with the crowd.

“Ok Disney really IS the most magical place on earth!” captioned Charly’s mom after experiencing the magic firsthand.

Have you witnessed an example of Disney magic? Tell us about it below!