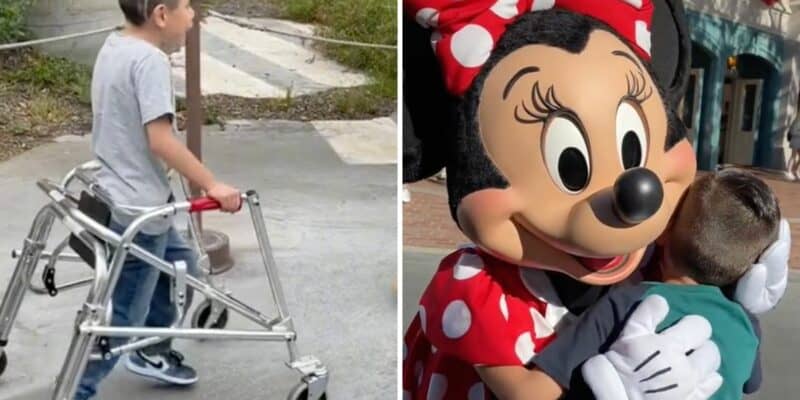 “Zach was trying to catch up to Minnie along with everyone else, but he couldn’t keep up,” Vanessa Pena captioned in her recent TikTok video seen below. What happened next was something they’d always cherish as a “core memory.”

Pena and her young son “cerebral palsy warrior” Zach visit the Disney Parks as often as Zach’s health allows. In fact, after undergoing his third brain surgery early this year, Disneyland was the first place he requested to go once he was cleared by his doctors, per a heartwarming video posted by his mom.

The video shows a seemingly awestricken Zach taking in the sights of Pixar Pier with a smile ear to ear whilst riding an Inside Out (2015) inspired family-friendly attraction. As he pivots his head, a lengthy brain surgery scar serves as a visual reminder of his strength.

“This is why I love Disney,” Pena wrote. “It’s the way it makes him feel.”

In this same trip, Zach was finally able to hug Mickey again and the video of the exchange suggests there wasn’t a dry eye in the comment section.

“I missed you so much Mickey,” Zach said as he rested his head on Mickey’s shoulder.

But it was Minnie who truly made the Pena’s trip magical this time around. When a Cast Member noticed that Zach was unable to keep up with a crowd vying for Minnie’s attention before she took her leave, they instructed Zach and his mom to “follow them and wait.”

“Next thing you know, Minnie comes back out running just to meet Zach and talk to him,” Pena captioned in her video.

In the video, Minnie is seen running to the boy clapping excitedly before getting down on his level for a hug and a chat, proving to the Pena’s that “Disney Magic is real.”

Similar to other videos of its kind, like this recent clip of Mickey Mouse taking extra time to console a military toddler at Disney World, many commenters credit Cast Members as the true embodiment of Disney magic, recognizing them for their “unwavering love and commitment” for their Guests.

What is your most magical Cast Member exchange? Let us know in the comments below!