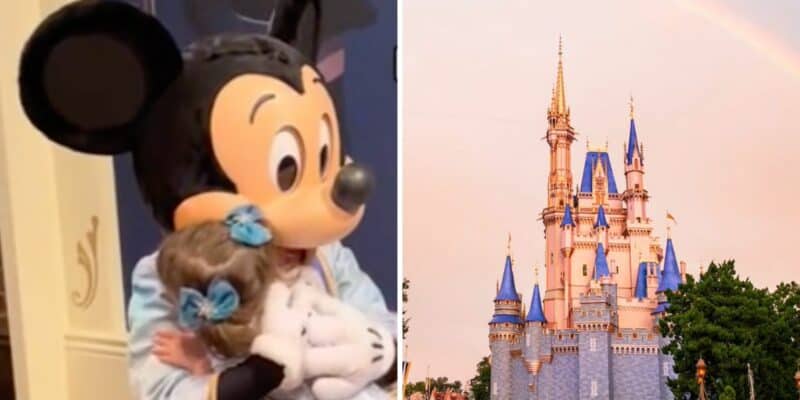 In a video posted to TikTok, Mickey Mouse is seen taking a knee and embracing the toddler of a military family, seemingly insisting on extra time with his gloved hand in the air.

User @lizroseshort shared the following appreciation video on July 8, 2022, thanking Mickey for the care and attention he showed her daughter:

She captioned the video for context, and the details read as follows:

“Our toddler has been having separation anxiety and many behaviors because her dad is about to deploy again. We decided to take a last-minute Disney trip to make some memories before her dad leaves.

As soon as Mickey heard, he stopped us from leaving and sat on the floor with her for a few minutes just so she could process everything.”

“Mickey knows,” @AttaPuma wrote. “Wishing him much safety, and you plan another family trip real soon!”

The comment section also brought together those who recall feeling similar to the toddler.

“As a grown Navy child, I feel for her. Most of my childhood my dad was gone on deployment,” @Amityspoonie wrote. “Support her missing him and being upset. Comfort her.”

Per the video, Mickey did just that with his lengthy interaction, something that isn’t always promised at the Disney Parks.

Many commenters shared that the video brought them to tears, with @kteach13 insisting that Mickey’s “friend” must have been “absolutely weeping in there.”

Others pointed out how clearly they could tell the little girl needed the extra affection and praised Mickey for his intuition.

More proof that Disney is more than a company, it’s moments like this for the whole family,” @Alyssa wrote. “Walt would be proud ❤️”

Do you have a favorite character interaction? Tell us in the comments below!