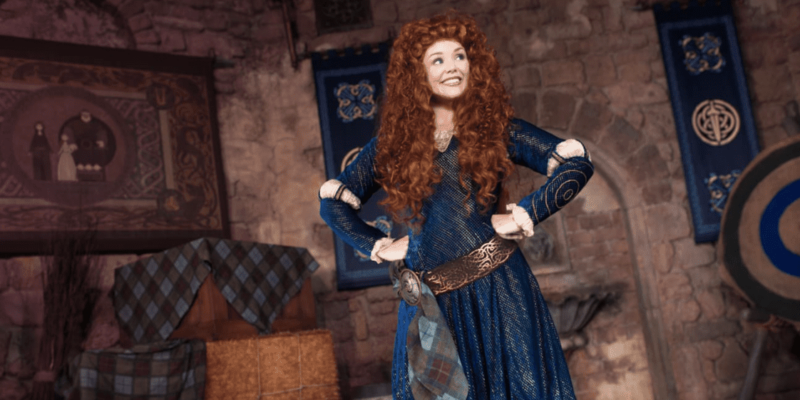 As Disney continues to slowly convert character experiences back to their former glory, Merida makes her way back to Fantasyland to visit with Guests. She arrived at Magic Kingdom yesterday, July 24, 2022, once again taking her place in Fairytale Garden.

The star of Disney/Pixar’s hit film Brave (2012), Merida has not interacted with Guests due to COVID-19 protocols, as her fan-favorite meet and greet was too immersive to properly follow safety guidelines.

Now, Guests can once again “Be Brave” with the Scottish Princess in a unique “play and greet” experience that Disney describes as follows:

“Inside Fairytale Garden, you can practice archery, colour your own “tapestry” of Merida as well as her faithful horse, Angus, and spend some time with Merida herself!”

Donning her classic green dress and wild, fiery curls, Merida once again awaits amongst stone arches and Celtic decor for Guests’ arrival. See the following video of a previous meet and greet, brought to you by Inside The Magic, for an idea of what to expect during a visit with the Princess of DunBroch.

For those looking to add Merida’s character experience to their itinerary, availability can be found on the Walt Disney World website, or by using the My Disney Experience app.

TikTok user @disneykara shared this video containing a visual guide to planning a visit with Merida using the My Disney Experience app.

The announcement also lists the return of the following experiences in the year 2022 at Walt Disney World, as previous offers continue their comebacks:

“We have even more fun, hugs and memories on the horizon. In the coming months, a visit to Magic Kingdom Park will bring chances to meet Aladdin, Jasmine, Merida, Pooh, Tigger and Storybook Circus pals like The Great Goofini in Pete’s Silly Sideshow. Your favorite toys will be ready for playtime in Toy Story Land at Disney’s Hollywood Studios, and Donald Duck and friends will rejoin their prehistoric party at “Donald’s Dino-Bash!” in DinoLand U.S.A. at Disney’s Animal Kingdom Theme Park.”

What is your favorite character experience? Tell us in the comments!