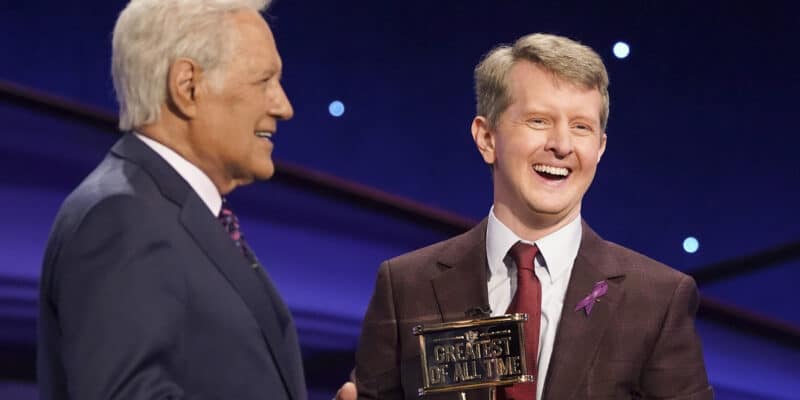 The current host’s future on Jeopardy is unknown at this time, however, as Ken Jennings’s recent exit from The Chase has many viewers convinced that he will be taking over full-time hosting duties next season. The fan-favorite has also been teasing his potentially permanent return on social media lately, leaving viewers hopeful that he will soon be back on a regular basis.

On Monday, July 18, 2022, in fact, Ken Jennings returned to his Jeopardy hosting duties for the firs time since early May — and immediately made a “painful” joke that left fans extremely amused.

During Double Jeopardy a clue for the category “Active Bible Verses” read:

Since no one had done this for 40 years, God told Joshua to get a knife & do this to male Israelites.

Contestant Erica Weiner-Amanchi buzzed in with the answer, “What is circumcise?”

Jennings confirmed her response was right, joking, “That is correct. A painful $2,000 for you!”

Aimee Everett posted that Jeopardy has the “easiest decision” in regard to making Jennings the game show’s permanent host:

“ A painful 2,000 dollars for you” @KenJennings continuing to be one of my favorite humans ever. @Jeopardy has the easiest decision in their hands.

“A painful 2000 dollars for you” 😂@KenJennings continuing to be one of my favorite humans ever. @Jeopardy has the easiest decision in their hands.

Another viewer quipped: “Ken Jennings just made a circumcision joke on Jeopardy, Make him the official host already.”

While the permanent host for Season 39 has yet to be confirmed, there are, perhaps, opportunities to go around as the game show franchise expands with its first ever spinoff, Celebrity Jeopardy! debuting this fall.

“The stars of our show and Mayim and Ken have done incredible job hosting,” Jeopardy executive producer Michael Davies told Variety. He went on:

He took to the show’s official blog to confirm that this new tournament will be happening.

Who do you want to permanently host Jeopardy?