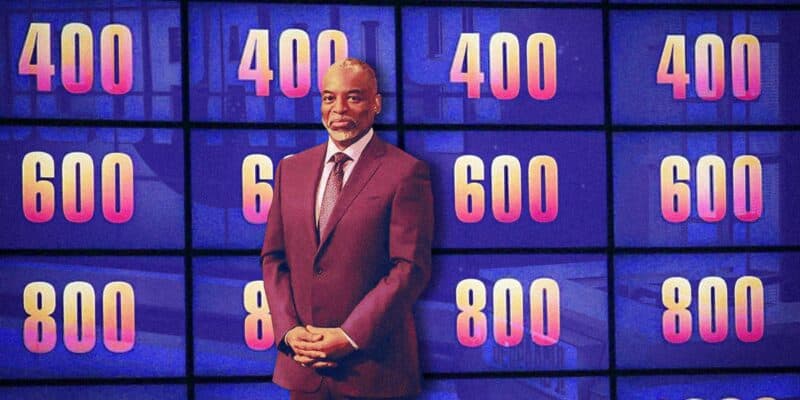 Now, however, one guest host, 65-year-old Burton, is speaking out about not landing the Jeopardy gig. The Star Trek: The Next Generation alum referred to producers’ decision to go with Bialik as a “public defeat.”

Speaking on the “In the Loop” podcast, Burton said:

“Experiencing a very public defeat — humiliation, if you will — was sobering. And what I learned from the experience, really, is that it reinforced my belief that everything happens for a reason, even if you cannot discern the reason in the moment.”

He went on to share that he “didn’t expect” Bialik to be selected and that he believes the entire competition was “fixed”:

“In the fullness of time, everything will be revealed. And like I said, it was I think in that first week of feeling really sort of not just disappointed, but wrecked,” Burton continued. “I didn’t expect that I would not be their choice for host…”

“…The truth is it was my favorite game show. It really was. I mean, I watched that show since I was in the third grade and Art Fleming was the host. And I honestly thought that I was well-suited for it. As it turns out, it really wasn’t a competition, after all — the fix was in.”

Many Jeopardy fans are not thrilled with Burton’s comments. Twitter user Chris responded to a post that the hosting decision was made based on race by writing:

Seriously? I watch Jeopardy. Love Levar Burton. Was so happy he got a shot after initially not being invited to guest host. I couldn’t make it through half an episode of his hosting. Just wasn’t his forte. Not everything is about race.

Seriously? I watch Jeopardy. Love Levar Burton. Was so happy he got a shot after initially not being invited to guest host. I couldn’t make it through half an episode of his hosting. Just wasn’t his forte. Not everything is about race.

I watched LeVar Burton’ s Hosting Jeopardy & as 38 years fan who watched between work years & now retirement you were unprepared & stank up the place. Honesty is the best policy!

I watched LeVar Burton' s Hosting Jeopardy & as 38 years fan who watched between work years & now retirement you were unprepared & stank up the place. Honesty is the best policy!

No matter where you land on Burton’s recent comments, there’s a lot to look forward to for Jeopardy viewers in the coming months.

Joining the ranks of shows like Celebrity Wheel of Fortune and Celebrity Family Feud, the first-ever Jeopardy spinoff that will air independently of the normal program was confirmed during the 2022 Upfronts in New York City. An official Tweet reads:

Furthermore, the series is set to have a brand new tournament later this year, as well.

He went on to write:

…we’re actually going to do it, and slot it in right before the ToC. More details to follow, including the criteria we will be using to select the rest of the participants. To be clear, though, the eligibility time frame will be the same as for this year’s ToC: We are looking at contestants who appeared on Jeopardy! since the last Tournament of Champions who we believe deserve a second shot.

It is worth noting that Bialik’s future at the Jeopardy podium is unknown at this time, however, as Ken Jennings’s recent exit from The Chase has many viewers convinced that he will be taking over full-time hosting duties next season.

What do you think about LeVar Burton’s Jeopardy comments?