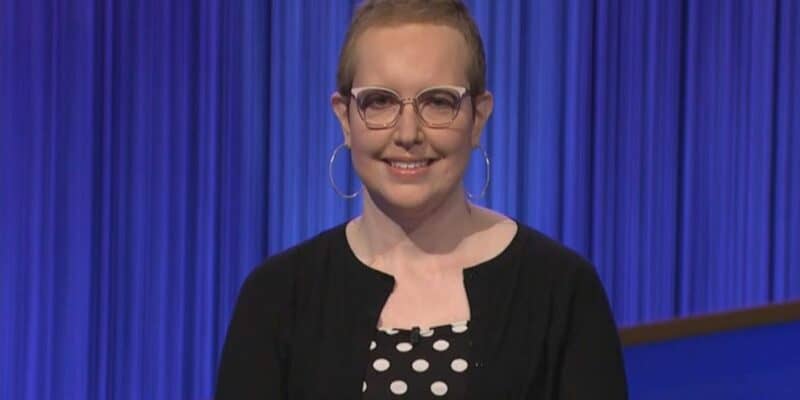 After winning a few episodes of Jeopardy!, Christine Whelchel got the courage to reveal her true look to fans, and it is so inspiring.

Recently, on a handful of episodes that Ken Jennings hosted, Jeopardy! contestant Christine Whelchel has been competing and capturing the attention of fans.

The piano teacher and church organist from Spring Hill, Tennessee first appeared on the show with dirty blonde hair, about should length, which you can see in the photo above.

But after Whelchel won her first few games, on Monday’s episode, she had a very different look. During a Q-and-A with host Ken Jennings she explained why she no longer had the shoulder length hair.

“After the winnings, I decided that I didn’t need to hide behind a wig anymore and I wanted to normalize what cancer recovery looks like,” Whelchel said.

The ABC prime time game show shared a video clip of Whelchel discussing her decision to Twitter, with a caption:

A strong Jeopardy! player and an even stronger person. ❤️

A strong Jeopardy! player and an even stronger person. ❤️ pic.twitter.com/NQqJS2uAs1

The tweet has garnered over 154,000 views and over 7,200 likes, with many fans and supporters commenting and even sharing their own cancer recovery photos.

Whelchel’s winning steak came to an end on last night’s episode, but she became a four-day Jeopardy! champion, winning a total of $73,602.

Are you a fan of Jeopardy!? Let us know in the comments below.

Comments Off on Recent ‘Jeopardy!’ Champ Makes Major Change To Reveal Her True Self