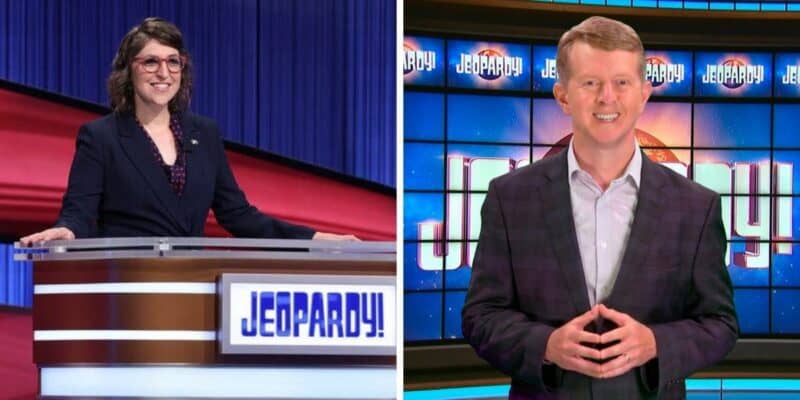 We recently reported that new Jeopardy! host Mayim Bialik has made a very subtle change to Jeopardy! that fans have definitely noticed. If you have not seen the actress host the show, she has been calling the opening round of the game “Single Jeopardy,” as opposed to just “the Jeopardy round,” which is what it was known as when Alex Trebek hosted.

Now, fans are noticing another change and inconsistency in the game show, this time involving both Mayim Bialik and other Jeopardy! host and champion, Ken Jennings.

When long-time Jeopardy! host, Alex Trebek, passed away, the ABC show went through a number of Guest hosts to see who would be the best fit to replace Trebek. After months of “auditions”, the show decided to go with not one, but two hosts — former Jeopardy! champion, Ken Jennings, and actress and author, Mayim Bialik.

The two are currently taking turns hosting Jeopardy!, but fans have noticed an inconsistency between the two, which is frustrating many.

This has not gone unnoticed by die hard Jeopardy! fans, and many are taking to social media to demand answers. One fan Tweeted:

So why is Ken Jennings “hosting” Jeopardy, and Mayim is announced as “the host of Jeopardy? Asking for a friend. Something you’ve already decided? #Jeopardy @KenJennings

So why is Ken Jennings "hosting" Jeopardy, and Mayim is announced as "the host of Jeopardy? Asking for a friend. Something you've already decided?#Jeopardy @KenJennings

@Jeopardy why, when Ken Jennings is hosting, is the introduction “hosting jeopardy”. But when mayim hosts the intro is “the host of jeopardy”. Just curious. Both are doing a good job

@Jeopardy why, when Ken Jennings is hosting, is the introduction “hosting jeopardy”. But when mayim hosts the intro is “the host of jeopardy”. Just curious. Both are doing a good job

Jeopardy! has yet to officially comment on the inconsistency, but TV Insider’s Matt Roush spoke out regarding this, and has a very reasonable explanation. He said:

“I’ve had several viewers ask me about this, and when I reached out to the show, I received no response — and if the hosts have commented on this, I’ve missed it.

The way I look at it is that the hosts have surely signed off on these introductions, and for Mayim Bialik, it reflects that her role is defined. She’s the host of tournaments and prime-time specials … and she fills in during the regular show when Ken Jennings isn’t available.”

Back in September, Jennings and Bialik were brought on to the game show as temporary guest hosts after former executive producer Mike Richards stepped down from his Jeopardy! permanent host role due to controversy.

Following, Jennings was named the face of the weekday episodes while Bialik was set to host Jeopardy! primetime specials through 2021; however, in early December it was reported that both Jennings and Bialik would be staying on through the entirety of season 38, which will air its last episode in late July.

Did you notice this inconsistency within the Jeopardy! intros? Let us know in the comments below.