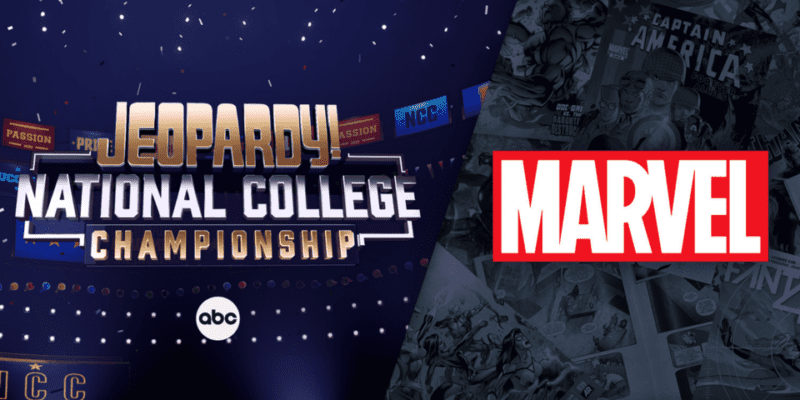 On a recent episode of the Jeopardy! National College Championship, Claire Jackson, a sophomore at Spelman College in Atlanta Georgia, Nam Vu, a senior at Georgetown University in Washington DC, and Fiona Hellerman, a senior at Tulane University in New Orleans, Louisiana battled it out.

During their competition, it was revealed that Marvel, for the first time in Jeopardy! history had its very own category. Clues included iconic Marvel films such as Black Panther (2018), Captain Marvel (2019), Guardians of the Galaxy Vol. 2 (2017), and more.

Mayim Bialik has been under fire lately as she made a very subtle change to Jeopardy! that fans have definitely noticed. If you have not seen the actress host the show, she has been calling the opening round of the game “Single Jeopardy,” as opposed to just “the Jeopardy round,” which is what it was known as when Alex Trebek hosted.

Bialik is currently hosting the Jeopardy! National College Championship, which just recently hosted the debut of Marvel’s first-ever category on the show!

Below, find all of the Jeopardy! Marvel category clues. The answers to each question can be found under each clue’s photo so you have time to guess. Let us know how many you get correct in the comments!

$200: This Black Panther actor wanted T’Challa’s accent to be authentically Africian, so he spoke in a dialect based on South African Xhosa

Answer to $200 clue: Who is Chadwick Boseman?

$400: The Arc Reactor in Tony Stark’s chest had a core of this element, symbol Pd. Exposure to it would later poison him.

$600: Groot’s vocabulary in Guardian’s 2 is limited. This actor got a script with translations from Groot-speak so his delivery could vary.

$800: Ant-Man is warned about getting small in this subatomic microverse. He gets stuck there, after his retrieval crew blips.

Answer to $800 clue: What is the Quantum Realm?

$1000: Captain marvel gets some powers due to the Tesseract, others she has via an infusion of this alien race’s blood, thanks to Yon-Rogg.

You can watch the clip from Jeopardy! below:

We want to say congratulations to Nam Vu, who ended up winning the game and moved on to the semifinals of the Jeopardy! National College Championship.

Did you sweep the Marvel category on Jeopardy!? Let us know in the comments below.

Comments Off on Marvel FINALLY Gets a ‘Jeopardy’ Category, Can You Solve The Clues?