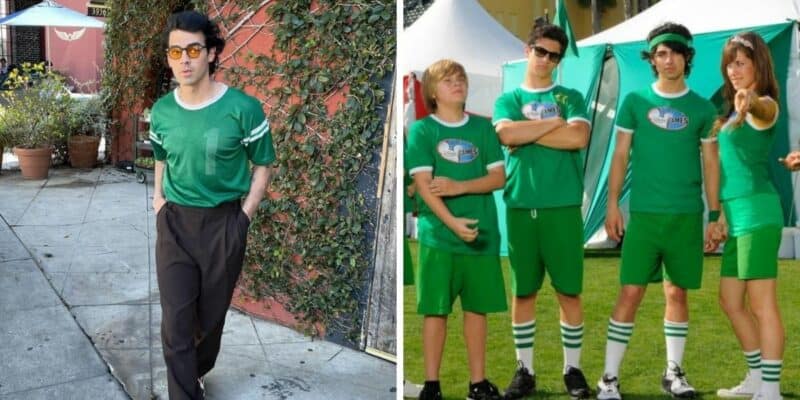 For those of you who grew up watching Disney Channel during the Hannah Montana, The Suite Life of Zack & Cody, and Wizards of Waverly Place era — I’m sure you are familiar with Disney Channel Games.

Popular Disney Channel stars, including Mitchel Musso and Moises Arias from Hannah Montana, Nick, Joe, and Kevin Jonas from Camp Rock, and Dylan and Cole Sprouse from The Suite Life of Zack & Cody, came together to compete in a variety of friendly relay races and obstacle courses, trying to beat the other teams, all for charity.

Now, Joe Jonas, a member of the Jonas Brothers, is reminiscing as he channels his time on Disney Channel Games.

Joe’s brothers, Nick and Kevin Jonas, also competed during this year — Nick was part of the red team while Kevin competed on the yellow team as team captain.

Now, 14 years later, Joe Jonas is channeling his time on the Disney Channel Games with his latest outfit. The Jonas Brother took to Instagram to share a photo of himself in a bright green shirt, with the caption:

I don’t know about you, but I would love to see a Disney Channel Games revival. It’s great to see that even 14 years later, Joe Jonas still appreciates his time on Disney Channel and reminisces from time to time.

Did you watch Disney Channel Games when it aired? Let us know in the comments below.