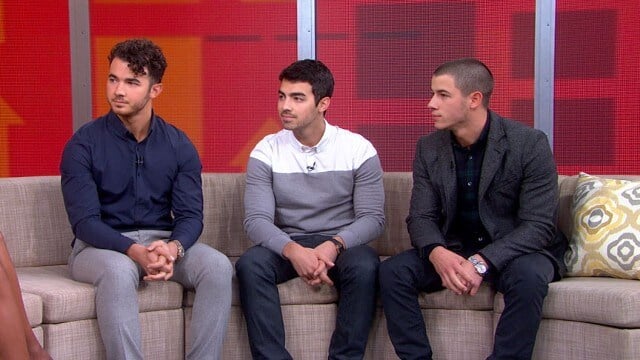 An entire generation of Disney fans has grown up listening to the tunes of the Jonas Brothers.

The Jonas Brothers– composed of brothers Nick, Joe, and Kevin Jonas– wrote several popular hits that appeared on Disney Channel all throughout the 2000s. The group ended up having their own Disney show, Jonas L.A., which lasted for two seasons and, on top of that, they were featured in two incredibly popular Disney Channel Original Movies, Camp Rock and Camp Rock 2, alongside Demi Lovato. Quickly, The Jonas Brothers ended up joining the main Disney crew, which included stars like Miley Cyrus (Hannah Montana) and Hilary Duff (Lizzie McGuire), and more.

Though they have spoken of many regrets with Disney and even broke up for several years before getting back together to write the album ‘Happiness Begins,’ the Jonas Brothers have played a major part in today’s pop culture.

Just recently, Joe Jonas conducted an interview with Rolling Stone sharing that he was reuniting with DNCE, the band he helped form while he was away from the Jonas Brothers. The group is known for its popular hit “Cake By The Ocean.”

Though Joe is working on the current project with DNCE and the band’s newest single “Dancing Feet” is set to be released in the near future, he shared in the interview that the trio of brothers had promised to be supportive of one another. Of course, Nick Jonas is currently enjoying life as a new father with his wife Priyanka Chopra.

“In the past with the Jonas Brothers, I used to carry a lot of trauma when new projects would present themselves because you could only focus on one thing at a time,” Joe said.

However, something interesting has occurred over the last 24 hours with the Jonas Brothers that have many fans scratching their heads.

Nick Jonas posted a TikTok that has since garnered hundreds of comments from fans wondering where missing music has disappeared to.

It seems that the Jonas Brothers have removed many songs and even albums from their musical library on platforms like Spotify and Apple Music.

The albums A Little Bit Longer (2008) and Lines, Vines and Trying Times (2009) have been removed from streaming platforms. While popular hits like “Burnin’ Up” and “Lovebug” can still be streamed, others are now grayed out and are no longer available.

There has been no reason given for why these songs and albums have been removed. Some artists have threatened to remove music from Spotify in protest of Podcaster Joe Rogan, but this has not been stated by the Jonas Brothers. At this time, all the other albums and songs are still available to be streamed.

The Jonas Brothers’ most recent hit single “Leave Before You Love Me,” featuring Marshmello, peaked at No. 19 on the US Billboard Top 100 in 2021.

What do you think of the Jonas Brother albums being removed?