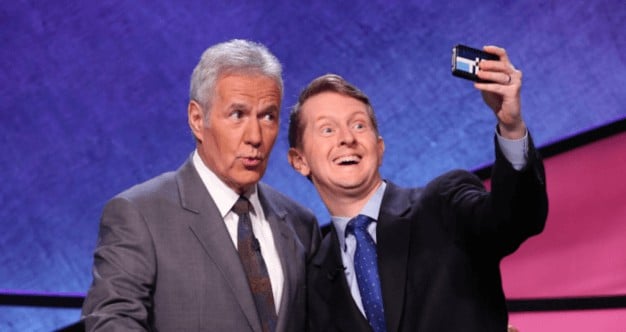 Jennings recently caused a stir among Jeopardy fans when he broke his Jeopardy silence to congratulate the game show’s team on their Emmy nomination for Outstanding Game Show.

Now, the former Champion has taken to social media again, this time to confirm big news about Season 39 of the hit series — live audiences will return for the first time since the COVID-19 pandemic changed production protocols in 2020.

Jennings shared Jeopardy‘s official Tweet welcoming viewers back to the Alex Trebek Stage, adding his own comments, as well:

This is very exciting.

Nobody would be more pleased about this than Alex himself. He was a natural showman (as anyone who ever saw a Jeopardy! taping can attest) and was never quite as happy doing the audience-less shows of the pandemic era. We’re back, Alex!

This is very exciting. https://t.co/E7qkCgmuMU

While the permanent host for Season 39 has yet to be confirmed, there are, perhaps, opportunities to go around as the game show franchise expands with its first ever spinoff, Celebrity Jeopardy! debuting this fall.

“The stars of our show and Mayim and Ken have done incredible job hosting,” Jeopardy executive producer Michael Davies told Variety. He went on:

He took to the show’s official blog to confirm that this new tournament will be happening.

Who do you want to be the permanent Jeopardy host?