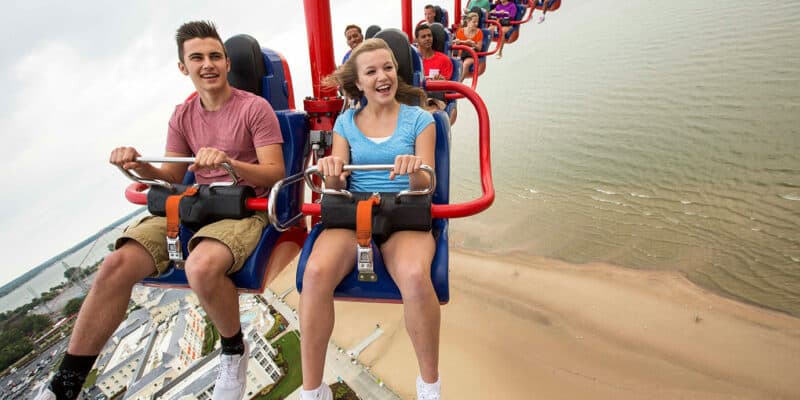 Theme parks are a family-friendly environment where everyone can enjoy thrilling rides, fun attractions, great entertainment, delicious dining offerings, and so many more activities!

To ensure the preservation of this family-friendly environment, as well as Guests’ safety and enjoyment, theme parks often have a series of rules and regulations Guests are expected to comply with. While these rules may be slightly different for each theme park, they generally include prohibited items, forbidden activities, and the general behavior expected from Guests.

Recently, one Guest refused to comply with said rules, causing him and his party to be escorted out of Cedar Point in Sandusky, Ohio.

Redditor u/Coasterasaurus, who witnessed the incident, shared that this Guest insisted on having his phone out while riding Windseeker, a thrilling attraction that takes Guests over 300 feet in the air, even when doing so is prohibited throughout the Park.

The original poster commented that the ride started normally, but about ten seconds into it, the swings were brought back down, and a Team Member took the man’s phone to the ride op booth. They added that the ride resumed, as usual, allowing this Guest to ride while security arrived at the attraction; and that when the ride stopped, and the Guest tried to get his phone back, he and his partner were escorted out of the Park. “Bet she was happy. I was,” added the original poster.

Fellow Redditors reacted quickly to this post, commenting on similar experiences they have recently witnessed at attractions like Magnum XL-200, Gemini, and Blue Streak, some of the Park’s most extreme roller coasters.

Others commented they were glad to see Cedar Point enforcing more strict measures to ensure the safety 0f Guests, as taking your phone out during a high-speed, tall attraction could result in a severe injury to Guests if it slipped out of your hand.

I’m glad to see this. I hate that the parks have to have a zero tolerance for this, but how hard is it to keep your phone away for the duration of the ride?

User u/Calebminear added to this by stating the following:

I just don’t understand the need to have your phone out on a ride. Like, can someone explain?

If you want a photo/video of the ride, POVs are everywhere online, filmed safely.

If you want a selfie while on the ride. Why? It’s gonna be shaky af if you shoot a video, and just buy the on ride photo

My brain just simply can’t comprehend the desire to do this sort of thing. And that’s coming from a photographer, who always has a film camera on me.

Both users made excellent points, stating there is no reason for Guests to pull out their phone while riding an attraction, especially a high-intensity one.

Redditor u/matthias7600 commented that, based on the possible consequences of these actions, Guests who break these rules should be criminally prosecuted.

Imagine that phone landing on your head after falling from 250+ ft.

They really should be criminally prosecuted.

While this may sound extreme to some, in light of recent events and based on the magnitude of the injuries some Guests have suffered after being hit by phones and other flying objects at theme parks, it seems like a fair measure to be implemented accordingly.

Related: Child Injured After Being Hit in the Face By Flying Cellphone on Roller Coaster

Guests must be aware of and comply with the different rules and regulations set out by theme parks to ensure their safety and the safety of others. Breaking these rules could result in being kicked off property, banned for life, or in some instances, arrested.

You can click here to learn more about Cedar Point’s code of conduct.

More on Windseeker at Cedar Point

Who said swings are for kids? Strap in for some big-kid fun because this ride was designed with thrill seekers in mind. It’s part nostalgia, part traditional swing, and all flying high. Feel the exhilaration of a bird in flight as the ride’s mighty arms extend outward at a 45-degree angle. Windseeker’s dizzying height of 301 feet (yes, that’s over 30 stories) promises views of almost the entire park and beyond on a clear day.

What’s more, Windseeker is two rides in one, offering a totally different experience at night! When the sun goes down, the fun lights up with Windseeker’s elaborate light show. As the swinging chairs ride to the top of the tower, a supernatural light display comes to life with a kaleidoscope of colorful patterns and shapes.