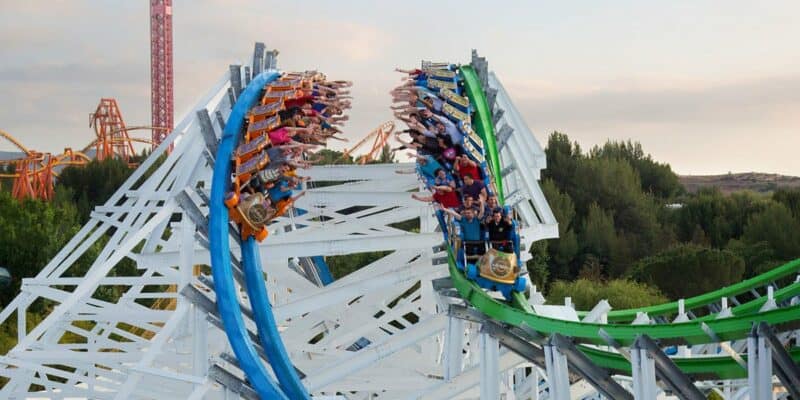 An eight-year-old child was injured and taken to the hospital over the weekend following an incident with a cellphone at a popular theme park.

When visiting Six Flags-– whether it be Six Flags Magic Mountain, Six Flags Great America, Six Flags Over Texas, or any of the other theme parks located across the country– Guests are treated to a ton of fun, including thrilling attractions and fun entertainment.

However, a recent trip to Six Flags Magic Mountain ended in horror for a family following a ride on the coaster Twisted Colossus.

Eight-year-old Evie Evans and her family are season pass holders and it was their first time heading to the Valencia amusement park this summer. As they headed onto the ride– just their second of the day– a cellphone flew from a Guest’s hand and hit Evie in the face.

Evie’s mom, Della White, told NBC Los Angeles that she spent the remainder of the ride trying to control the bleeding along with her daughter screaming.

“As soon as she took her hand away from her eye, there was just blood everywhere,” White said.

Passengers a couple of rows back caught the phone and said they saw it come flying from several rows up the train.

Evie was treated when she came back to the station and needed a total of 10 stitches to close the wound.

While Evie was being treated, White’s other daughter Eden, said a man came up to them looking for his cellphone. He told them to “stop freaking out” and that it wasn’t “a big deal,” she said.

Though the family attempted to file a police report, the police told Evie’s father that a crime had not been committed. The family is asking the owner of the cellphone to come forward and pay her medical bills.

Wood meets steel as the iconic “woodie” returns as the new Twisted Colossus — the longest, most innovative hybrid coaster in the world. Still in its landmark location along the perimeter of Six Flags Magic Mountain and nestled inside the tracks of the behemoth coaster, Goliath, Twisted Colossus remains the coaster monument most recognizable to millions of people who pass by the park each year…but now with an exciting twist.

Integrated into the beautiful crosshatching of white wood will be intertwined track, steep banks and unrelenting rolls and spirals. Revel in the fun and excitement of traditional wooden coaster thrills while facing your fears on the latest state-of-the-art coaster technology. Twisted Colossus is the best of both worlds, a modern marvel making roller coaster history!

What do you think of this incident at Six Flags? Let us know in the comments!