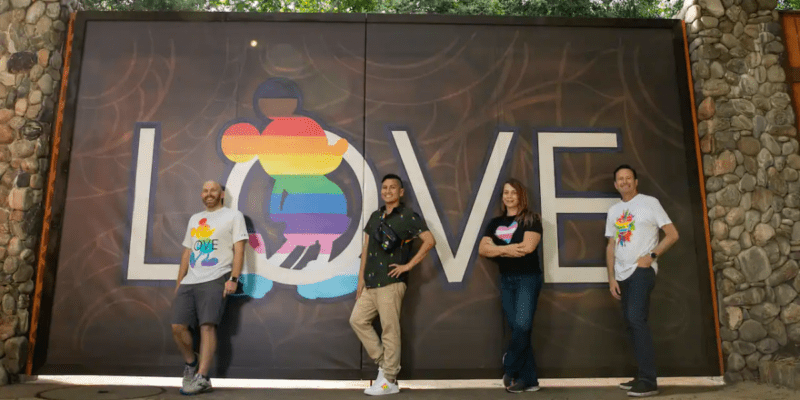 Haven’t had a chance to celebrate Pride Month at Walt Disney World Resort this June? Not to worry!

Though many of Walt Disney World’s Pride treats are going away after June 30, one particular Disney Park Pride offering is here to stay through the end of July.

According to Disney Parks Blog, Pride photo walls will stay at Walt Disney World for another month due to popular demand:

And if you haven’t had the chance to experience the Pride Walls and photo opportunities across Walt Disney World, I’m happy to share that, due to popular demand, you’ll be able to enjoy many of them through July!  You can also continue to Share Your Pride year-round with a selection of Pride-related Disney PhotoPass enhancements, select merchandise, and custom embroidery.

The Walt Disney Company also announced that Aulani Resort Cast Members will participate in Honolulu, Hawaii’s Pride parade for the first time this October! This Parade will mark Cast Members’ participation in over a dozen Pride parades in 2022.

Disney’s Pride celebration was the biggest ever this year. Disneyland Paris held Magical Pride nights, and The Walt Disney Company renamed the Rainbow Disney merchandise collection to Disney Pride for the first time. Through June 30, 100% of the collection’s profits will go to organizations benefitting LGBTQIA+ youth.

The Walt Disney Company’s Pride celebrations come amid tension with one of its home states, Florida, and Governor Ron DeSantis, following the Parental Rights in Education Act – also known as the “Don’t Say Gay” bill.

If lawsuits against the bill fail, Walt Disney World will lose Reedy Creek in 2023. Despite the conflict, the Walt Disney Company is not backing down from supporting its LGBTQIA+ fans and Cast Members.

Are you headed to Walt Disney World Resort this July? Keep an eye out for the Pride photo walls!