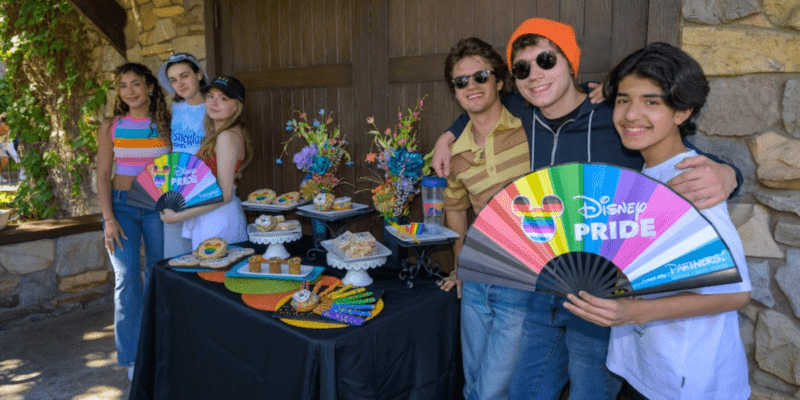 Disneyland Resort and Walt Disney World Resort are turning heads this month with their Pride celebrations, including themed treats and the first officially titled “Pride” merchandise collection, with 100% of the profits through June 30 going to organizations that support LGBTQIA+ youth.

This week, The Walt Disney Company invited a special group to Disneyland Resort to celebrate Pride Month: the cast of Hulu’s Love, Victor!

The cast of Love, Victor also met and took photos with members of the Disneyland PRIDE Business Employee Resource Group (BERG), “which consists of cast members who advocate on behalf of the LGBTQIA+ community.” Then they sampled some of Disneyland Resort’s exclusive Pride Month treats!

This celebration comes amongst recent backlash against The Walt Disney Company and CEO Bob Chapek. The Company initially remained silent about Florida Governor Ron DeSantis’s “Don’t Say Gay” Law, formally known as The Parental Rights in Education Act. After Cast Member and fan protests, The Walt Disney Company spoke out against the law and promised to pause political donations to anti-LGBTQIA+ candidates.

Governor DeSantis reacted by introducing and passing legislation to dissolve Florida’s Reedy Creek Improvement District, which has allowed Walt Disney World to operate private municipal services since 1967. Many Republican legislators around the country have demanded further action against The Walt Disney Company.

Love, Victor will premiere its third and final season on Hulu on June 15, 2022. This season, according to the Disney Parks Blog, shows Victor Salazar “going on a journey of self-discovery — not only deciding who he wants to be with, but more broadly, who he wants to be. With their post-high-school plans looming, Victor and his friends are faced with a new set of problems that they must work through to make the best choices for their futures.”

Set in the world of the original 2018 film “Love, Simon,” the series follows Victor, a new student at Creekwood High School on his own journey of self-discovery, facing challenges at home, adjusting to a new city, and struggling with his sexual orientation. When it all seems too much, he reaches out to Simon to help him navigate the ups and downs of high school.

Are you excited for season three of Love, Victor? Let us know in the comments!