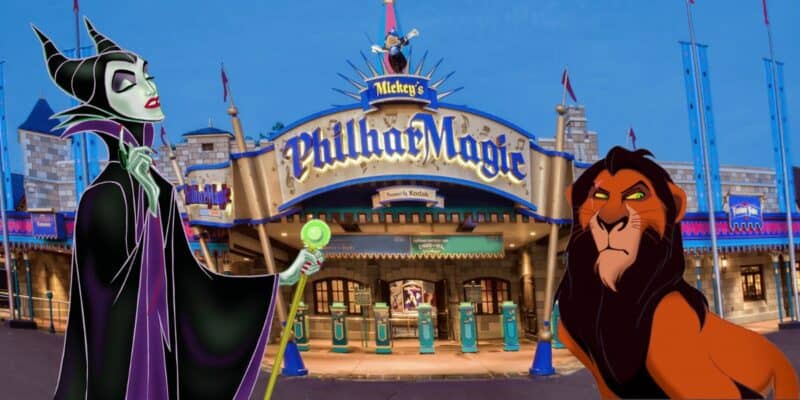 Mickey’s Philharmagic is certainly a classic attraction at both Walt Disney World Resort in Orlando, Florida and in Disneyland Resort in Anaheim, California.

And most recently, Disney decided to add a brand-new scene to Mickey’s PhilharMagic featuring Pixar’s Coco (2017).

Now, fans have another idea for Disney — create a Disney villains version of Mickey’s PhilharMagic for Halloween! The conversation started when one Disney fan shared their idea for a Disney Villains version to Reddit, writing:

Instead of Donald stealing the hat, we would have a trio of mysterious figures steal the hat and mickey and the gang chase after them, running into all the villains tring to get it back.

So instead of seeing classic moments from Disney movies with the heroes, we would see the villains doing their flamboyant numbers.

The fan even included which songs they would love to see within this version of Mickey’s PhilharMagic, writing:

Poor Unfortunate Souls – Ursula, casting her spell with her two ghostly magical hands, trying to steal the voices of the audience.

Be Prepared – Scar, with his hyena army and the creepy green light they marched in

Friends On The Other Side – Dr. Facillier and all the shadowy loa swirling around the theater spooking the guests

And finally, during the climax, mickey and the gang have chased down the mysterious trio who reveal themselves to be… Lock, Shock, and Barrel from nightmare before christmas, and we get the final number from their boss

Several other fans are chiming, all on board with this idea. One user would like to see Donald remain in the show though, writing:

This is great. But leave Donald in it. Donald + villains is my dream!

To which another fan agreed, saying:

Yeah you’ve gotta have Donald in there for the “finale”. I think take OPs idea except the three figures turn out to be Huey Louie and Dewey. Donald chases them through a bunch of villain musical numbers and then at the end he corners the boys who are saved by witch hazel from the old trick or treat short, and she does a magic whammy on him that sends him into the wall.

What do you think? Should Disney bring a Villains version of Mickey’s PhilharMagic for Halloween season? Let us know in the comments below.