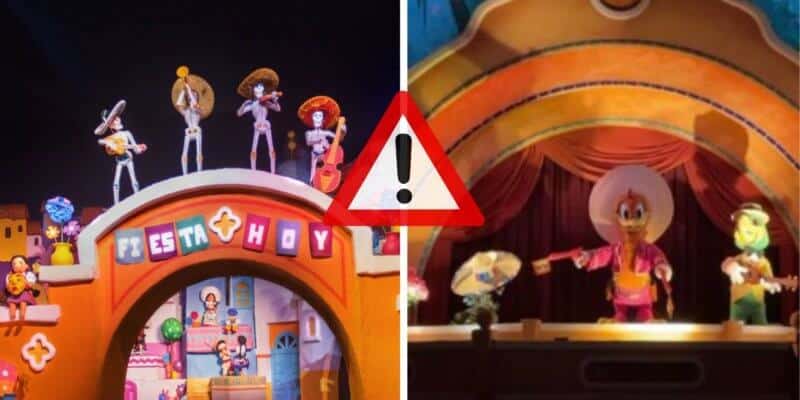 If you have ever needed a break from eating and drinking around the world when exploring EPCOT, you may have ended up on an air-conditioned break with Gran Fiesta Tour inside the Mexico pavilion. The Donald Duck/Three Caballeros-themed attraction is a personal favorite for this reporter, specifically, for the grand finale concert scene. Lately, however, that finale has lost a lot of its grandeur.

On January 5, the Donald Duck animatronic that Guests would watch perform the “Three Caballeros” tune alongside Panchito, the Mexican charro rooster, and José Carioca, the Brazilian parrot, went missing. Now, five days later, Donald Duck is still MIA and no one knows why.

Blogger and Instagram user Jenny Flake (@disneyhungry) posted the missing duck to her story, and with it, we can confirm that a plant with a sombrero remains in Donald’s place for the time being.

Many fans of Gran Fiesta Tour have been treating Donald’s disappearance as his “grand finale.” Molotov Ducktales is one of many who have taken to Twitter to Tweet “RIP Donald Duck” in the wake of the missing bird.

With “RIP Donald Duck” being somewhat of a social media trend within the Disney community as of late, @disneyhungry’s second Instagram story was quite unfortunate (albeit hilarious) to look at. We can see that Panchito has his gun pointed directly toward the Donald Duck tree — an object that personally reminds this reporter of a tombstone, especially with Donald’s hat remaining on stage.

It seems that this time, Donald has been escaping the Caballeros for days! Perhaps Jose and Panchito put the tree up in his place to try and disguise the fact that Donald was missing? Disney has not mentioned an explanation for why the Donald Duck animatronic is missing, but it is a funny thought that the birds are trying to cover up his disappearance.

Although we have seen animatronics go down on Gran Fiesta Tour, to have Donald missing for so many days with no sign of return likely means he needs a little extra TLC! We expect him to return after the repairs.

What do you think is wrong with the Donald Duck animatronic on Gran Fiesta Tour? Let us know below!