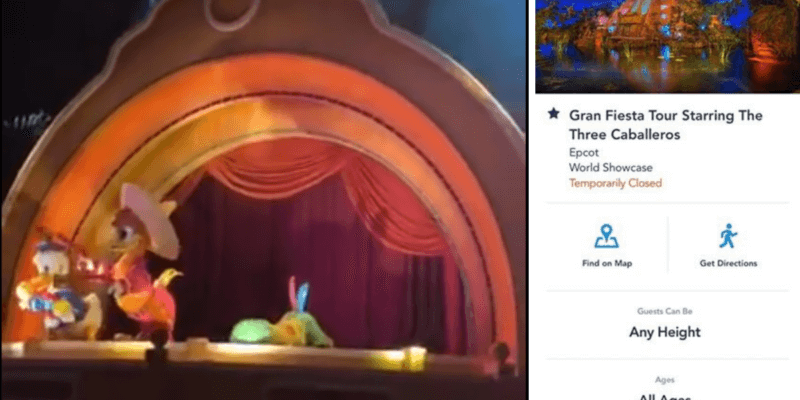 The Gran Fiesta Tour in EPCOT’s Mexico pavilion is a popular ride for all ages, similar to “it’s a small world.” The attraction features Donald Duck and his two buddies, Panchito and Jose Carioca — you may know all three as the Three Caballeros. Unfortunately, the Jose Carioca animatronic had fallen down sometime during the ride today, and Disney hadn’t gotten the chance to correct it before he was seen by Guests.

Magical News LIVE on Twitter shared a video of the situation regarding the EPCOT animatronic, along with the caption “JOSE DOWN.” Take a look:

The video was shared to Twitter just over an hour ago at the time of this article’s publication. And after that, the Gran Fiesta Tour Starring the Three Caballeros was temporarily closed.

Later, the attraction was back up and running, only Jose Carioca was removed, likely for repairs.

Keep in mind that even though Walt Disney World Resort is the Most Magical Place on Earth, it is not immune to real-world issues that may arise from time to time. Attractions at Disney World delight thousands of Guests each and every day, so it is not uncommon for certain issues to come up. Luckily, Disney’s team is there to help.

In this situation, we hope Jose Carioca was back to serenading Guests on the Gran Fiesta Tour soon.

About the Gran Fiesta Tour

Take in the sights of Mexico and the antics of 3 feathered amigos on this gentle boat ride through the Mexico Pavilion.

Inspired by the 1944 Disney film The Three Caballeros, your adventure comes to life against a backdrop of live-action footage, hand-drawn animation and the jaunty musical score from the movie.

Watch a full ride through below:

Book a trip to Disney World with the Authorized Disney Vacation Planners at Academy Travel!