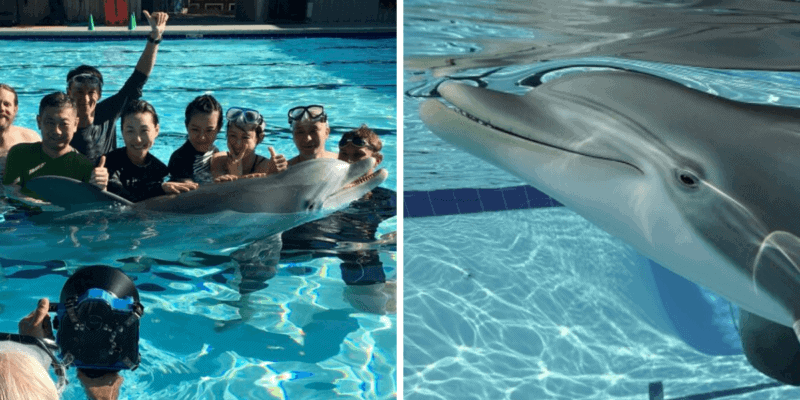 Walt Conti and Roger Holzberg, former Creative Director and Vice President at Walt Disney Imagineering, are off on a new enterprise and are still finding ways to make new undersea magic possible.

Working with San Fransisco-based Edge Innovations, the former Imagineers have created a full-sized realistic robotic dolphin that has the potential to replace real porpoises at theme parks, aquariums, and other closed-tank human interactive exhibits, according to Gizmodo.

Walt Disney Imagineers first tested this concept 20 years ago at The Living Seas–now called The Seas with Nemo and Friends–with the first robotic dolphin called the Dolphin Robotic Unit (DRU). After a run at EPCOT, it was moved to Disney’s private island Castaway Cay to partake in interactive experiences there.

Here is a video of the former EPCOT attraction:

The new adolescent bottlenose dolphin, named Flipper, is designed to simulate real-life movements and appearances. The designers incorporate a realistic skeletal and muscle structure and it has proper weight distribution. It weighs 595 pounds, boasts a 10-hour battery life and can survive in saltwater environments for up to 10 years. However, the current lack of cameras and sensors leave it without full autonomy and must be controlled by an operator responding in real-time.

But those present limitations have not stopped the Chinese from showing their growing interest in the idea. According to Metro, the robotic dolphins cost between $40-60 million and Edge Innovation believes it can sell 150 to Chinese aquariums and theme parks over the next three years.

‘In terms of a 10-year business operating period and a two million annual visitor capacity, the overall investment and maintenance costs for a decent animatronics entertainment portfolio only accounts for about one quarter or no more than one-third of what a traditional aquarium spends,’ Edge Innovation’s Li Wang told the South China Morning Post.

But Flipper has practical applications in theme parks across the world as well. Not only is public opinion continuing to move further away from keeping large, free-range animals like bottlenose dolphins in captivity, but realistic robotic dolphins would also vastly increase the accessibility to unforgettable interactions with marine life.

What do you think about robotic dolphins? Do you think they should replace the real dolphins in captivity? Why or why not? Let us know in the comments!