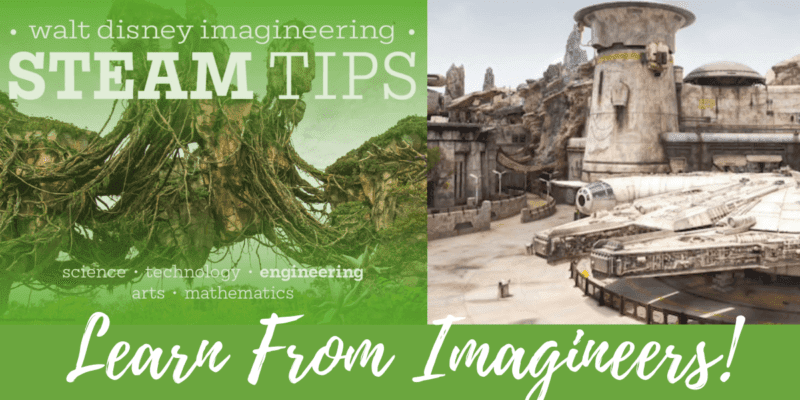 Have you always wanted to be a Disney Imagineer? Then you’re in luck.

The Disney Parks Blog recently started an interview series with the Imagineering team under the hashtag #DisneyMagicMoments. Each post highlights a different aspect of STEAM (Science, Technology, Engineering, Arts and Math) and the role it plays in the Imagineering Department within the Walt Disney Company.

In last weeks post, Disney Imagineers were interviewed on the importance of the art discipline in the creative process. They talked about how it goes hand in hand with the technical aspects of STEAM such as science and engineering.

In this weeks Disney Parks Blog post, Imagineers shared STEAM tips on how to ‘think like an engineer’ and they’re sure to inspire all future imagineers out there.

Kevin Rafferty, Jr., who works with the communications team at Walt Disney Imagineering interviewed various cast members and got the following quotes with usable tips for those interesting in pursuing an engineering discipline!

Tip 1: Lay out a user interface. Getting started is simpler than you might think!

“Angela Jay, a senior software developer who worked on many of the interactive elements in Star Wars: Galaxy’s Edge, said, ‘A user interface is anything that allows a user (you!) to interact with a system, like a ride or a robot or an app. First ask what a user might want to know about a system and how they might need to control it. Then decide how to organize everything, which starts with drawing it out. Where should the information be displayed? Where should the buttons go? What kind of buttons? Maybe a dial would work better? Since this is a sketch, you can rearrange things until the layout looks right to you. You can even cut them out of paper and lay them out. Test out your design with a family member to see if they understand what everything is and does. This is called ‘user testing’ and is a part of User Experience design. If something doesn’t make sense, try again!'” — Disney Parks Blog

Tip 2: Think of a complex system like a layered cake.

‘Armand Dao, a senior civil engineer, works on utility designs such as stormwater management plans. Armand recently worked on the utility designs for Pandora – The World of Avatar. He suggested, ‘When designing complex utility systems, think about it like a layered cake. The bottom of the cake is the base and most stable, therefore, you can start stacking your systems from there. We start with the deepest utilities and then work our way up. Once that’s complete, our show production team puts the icing on the cake for guests to see.'” — Disney Parks Blog

Tip 3: Change your perspective to be a problem solver.

‘Senior Project Controls Planner Jason Bayer helps to plan the design, production and installation of attractions such as Avatar Flight of Passage and Millennium Falcon: Smugglers Run. Jason advised, ‘Engineering is really about developing a way of thinking that makes you a good problem solver. If you ever think to yourself, ‘When will I ever use this in real life?,’ try to shift your perspective and view it as a way to help develop your problem-solving skills. The ability to assess a problem or situation, think through possible outcomes by applying your knowledge and come to a good answer or decision is something that will be valuable your entire life.'” — Disney Parks Blog

Imagineers work hard every single day to make magic all around each Disney park. They ensure that our favorite attractions are in tip top shape and every single detail works together for the purpose of storytelling. If that isn’t pure magic, then I don’t know what is.

Stay tuned with the Disney Parks Blog to get weekly updates on more STEAM tips from hardworking Imagineers!

Do you dream of being a Disney Imagineer? Let us know in the comments.