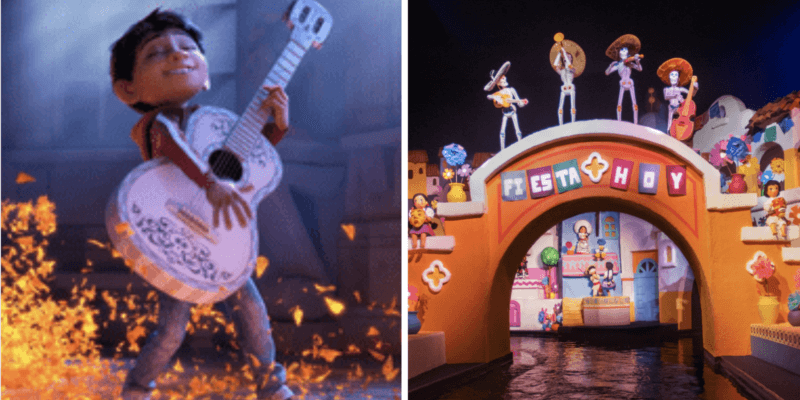 If you’re a fan of the EPCOT World Showcase’s Mexico pavilion, you probably already know that there have long been rumors that the Gran Fiesta Tour ride inside of San Angel Inn Restaurante will be getting a Coco (2017) retheme.

Here, we take a look at all of the reasons Disney might consider a Coco retheme sooner rather than later.

Another animatronic has been removed.

Last year, the Jose Carioca animatronic suffered an unfortunate fall and was removed from the ride for a period of time — now, it seems it’s Donald Duck’s turn. DisNoah’s Adventures Tweeted:

Sorry Jose Carioca you already had your vacation now its Donald Duck’s turn to enjoy his vacation lol! Donald Duck Animatronic at the Gran Fiesta got removed due to tech problems! Hopefully be back from vacation this month! Now the Dos Caballero is back again!

Sorry Jose Carioca you already had your vacation now its Donald Duck's turn to enjoy his vacation lol! Donald Duck Animatronic at the Gran Fiesta got removed due to tech problems! Hopefully be back from vacation this month! Now the Dos Caballero is back again! pic.twitter.com/siSBx0gay0

Although Walt Disney World officials would undoubtedly make an official announcement before beginning a major renovation project at Gran Fiesta Tour — akin, perhaps, to the Splash Mountain Princess and the Frog retheme announcement — having to refurbish yet another animatronic could certainly indicate to the Imagineering Department that now is the time for a change.

Disney has made clear they want a Coco presence in the Mexico Pavilion.

Although Disney has not released an official statement regarding the retheming of Gran Fiesta Tour to include Miguel, Dante, Hector, Mama Coco, Mama Imelda, and other characters from Disney-Pixar’s Coco, they have made clear that the musical movie’s presence is welcome — and wanted — in the Mexico pavilion.

Most notable is the wandering puppet show, Mariachi Cobre Presents…The Story of Coco, that has been available for Guests to enjoy the past two years during the EPCOT International Flower & Garden Festival and in 2019 for Dia de los Muertos. As per our previous coverage of the popular puppet show:

The Story of Coco, is a unique puppet show that performs the songs from Pixar’s beloved musical from “Poco Loco” to “Remember Me.” Talented puppeteers, musicians and Folklorico dancers perform mariachi music and tell the story of Miguel Rivera and his journey to and from the land of the dead. Guests will see Miguel strumming his guitar and singing along (with the assistance of his puppeteer of course).

Furthermore, Disney added the Remember Me! exhibit to the interior of San Angel Inn, adding a dash of Coco ahead of any official news regarding the Gran Fiesta Tour attraction’s future. Orlando Weekly reports:

Disney did unveil an interactive Coco themed exhibit, Remember Me!, in the entrance area to the indoor section of Epcot’s Mexico pavilion. The display, which was delayed by a few months, was rumored to be a testing ground for Disney to gauge how popular Coco was to park guests.

Furthermore, Gran Fiesta Tour also regularly has some of the shortest wait times of any ride at Walt Disney World’s four theme parks — EPCOT, Magic Kingdom, Disney’s Animal Kingdom, and Disney’s Hollywood Studios. This proves that interest in the attraction is not high. A retheme showcasing a popular animated film like Coco could change this.

What do you think? Should Coco animatronics and theming be added to the Gran Fiesta Tour?