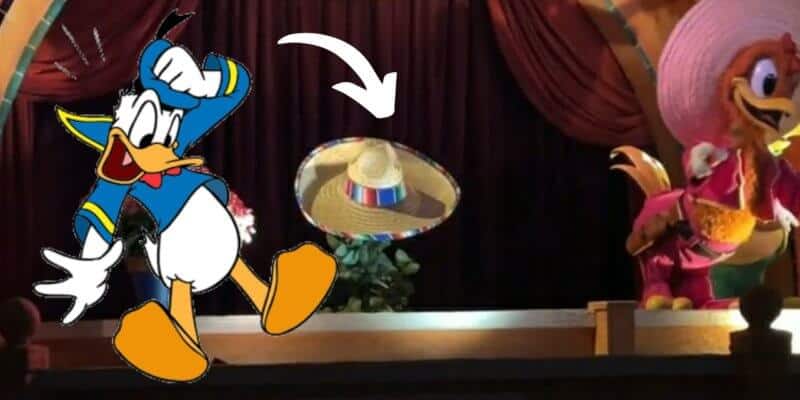 The Gran Fiesta Tour in the Mexico Pavilion at EPCOT is a personal favorite for this reporter. The relaxing boat ride and chipper music is the perfect break to a food-crawl day in the World Showcase, with the best part being the grand finale concert starring fan-favorite Donald Duck, Panchito, the Mexican charro rooster, and José Carioca, the Brazilian parrot — except today, it looks like Donald couldn’t make the concert.

Yesterday, Caballero duck: 2021 edition (@caballero_duck) Tweeted a video of Donald Duck shaking his maracas on the Gran Fiesta Tour, but looking like he may have had one too many margaritas at La Cava del Tequila in the Mexico Pavillion. If you take a look at the video, you can see the Donald Duck animatronic is half-way toppled over and looks like he can hit the ground at any moment.

Today, it seems that Disney was not able to fix the problem overnight and the animatronic is now gone! DisNoah’s Adventures (@disnoahadvntrs) posted on Twitter:

Sorry Jose Carioca you already had your vacation now its Donald Duck’s turn to enjoy his vacation lol! Donald Duck Animatronic at the Gran Fiesta got removed due to tech problems! Hopefully be back from vacation this month! Now the Dos Caballero is back again!

Sorry Jose Carioca you already had your vacation now its Donald Duck's turn to enjoy his vacation lol! Donald Duck Animatronic at the Gran Fiesta got removed due to tech problems! Hopefully be back from vacation this month! Now the Dos Caballero is back again! pic.twitter.com/siSBx0gay0

There are a few exceptionally funny things about what is going on here. First of all, Donald’s hat is sitting on top of a plant. Personally, I think this looks as if Disney is having a laugh about the animatronic breaking and trying to have Guests believe Donald Duck is incognito as the plant. Or, if we want to look at this with a dark eye, having Donald’s hat on a stick with a plant below also looks representative of a tombstone for the bird. Of course, both of these ideas are just speculation and Disney has not explained why the animatronic is gone, while the hat stays behind.

The other comical note here is that Donald being missing from the grand finale of the Gran Fiesta Tour still fits the attraction storyline. The attraction story, as Disney explains, follows Donald’s disappearance.

Typically, of course, we get to see Donald be rescued by the other caballeros — but, by having his animatronic gone, it is as if the 2 birds were unable to find him before the show! Unfortunately, the animatronics in this ride do tend to topple over from time to time, as Jose did this past summer as well. That being said, Disney always finds a way to get the Caballeros back on stage — eventually.

Have you ever rode a Disney attraction to find a missing animatronic?